Rossi: Yamaha could need "another season" to fix issues 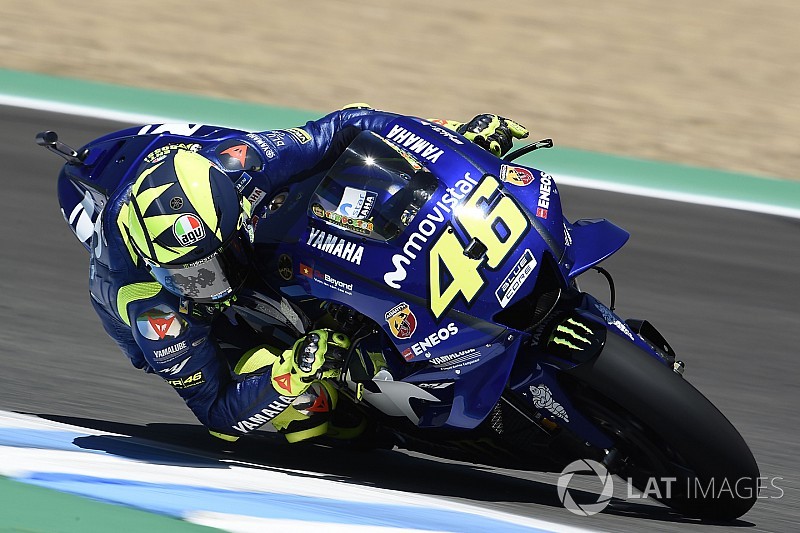 Valentino Rossi says he is worried Yamaha will “need another season” if it fails to find a solution to its electronics issues quickly.

Rossi and teammate Maverick Vinales suffered with a lack of grip in the sweltering conditions all weekend at the newly-resurfaced Jerez track, with the pair only 10th and 11th in qualifying and circulating in the outer reaches of the top 10 for much of the race.

The collision involving Andrea Dovizioso, Dani Pedrosa and Jorge Lorenzo in the closing stages allowed Rossi to salvage fifth, and he felt his pace was better than it was at this race last year, in which he finished a distant 10th.

However, he admits eighth was his “limit” had it not been for the crash ahead of him, and says it is “not good news to be happy after a race like this”.

“To arrive in the fifth position after my speed in the weekend is positive, and in the end now I feel quite happy,” Rossi said.

“But this is not a good news to be happy after a race like this, our technical situation is like this.

“But, for me, is very clear what we have to do on the bike and it's true we need time, but Yamaha have to do an effort to try to shorten the time because if not we need another season.

“So I hope that Yamaha give to us the maximum support to be competitive, because like this today my race was good, I had a good pace, but without the incident in front I arrive eighth.

“This track is a track where we suffer. It's true also that I was a lot faster compared to last year; last year I was 38 seconds [from the win], today I take eight seconds [back].

“But in any case I am in P8 without the crash, and now this is our limit.”

When asked if any of his problems stemmed from the bike itself, Rossi said it was “25/75” mechanical and electronics, and says Yamaha will only be working “on the 25” in Monday's Jerez test.

“For me personally, it's a little bit mechanical part, but it's electronics. 25/75,” he added. “Tomorrow [Monday] we will have some mechanical parts [to test], but we work on the 25.

“It's a shame because, from what I understand, our the rest of the bike is good this year, but we need that [electronics fix] and I hope that Yamaha give 100 percent to fix the problem as soon as possible.

“From what I understand, it's work that needs time. This is the bad news, but the good news is anyway you have to work on the black box.

“So the problem is you need to start, from when you start you need time but when you don't start, the races, months, championships pass and we still have the same problem."