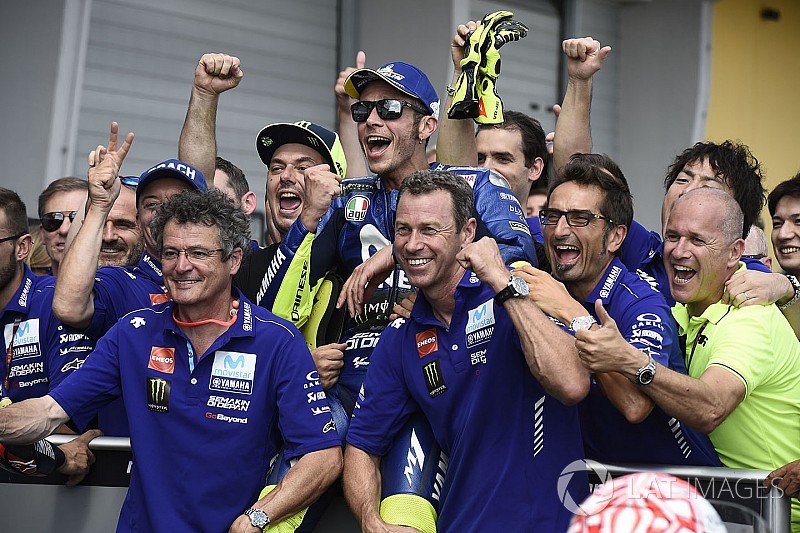 Valentino Rossi has suggested that Yamaha's MotoGP engineers now have taken to running away from him as a result of his constant demands for an acceleration breakthrough.

The Iwata manufacturer securing its best finish of the season at the Sachsenring last weekend, scoring its first double podium of 2018 as Rossi and Maverick Vinales finished second and third.

However, defeat at the hands of Honda rider Marc Marquez means Yamaha is now in the midst of its longest losing streak in the MotoGP era - with its current 19-race winless run exceeding the 18-race barren spell it endured between late 2002 and the start of 2004.

Rossi identified electronics as an area where Yamaha has lagged behind rivals Honda and Ducati from the very start of the year, and has reiterated the need for a step in this area several times since.

Speaking after finishing second in Germany, the 39-year-old joked that his demands were becoming so predictable that staff at Yamaha's Lesmo headquarters were now avoiding him.

"I'm putting a lot of pressure on those at Yamaha, and now they cannot stand me anymore and when they see me they run away," he quipped.

"Because every day I'm there I'm urging them because we need something on acceleration.

"The reality is it did not help much, but we hope, because the championship is still long and I would like to try to fight to win before the end of the year."

At the halfway point of the season, Rossi lies second in the championship, 46 points behind Marquez, despite having not yet won a race.

The Italian suggested the gap may still be possible to close, with 10 races remaining, should Yamaha find more performance after the summer break.

"We have to start winning races again," said Rossi. "Marquez is 46 points ahead, but more importantly he is stronger, so realistically it's hard.

"Nonetheless we'll try every way as always. There are still 10 races. If the Japanese give us a hand and we can resolve our little problems…

"This bike handles better than last year's and I've said that since the first time I rode it, but it lacks a bit to be there."

Bautista: I can’t do more to prove I belong in MotoGP