Rossi had to overcome Yamaha “politics” to regain form

Valentino Rossi says he had to overcome Yamaha "politics" to make the set-up changes he wanted ahead of the Andalusian Grand Prix, as he returned to the MotoGP podium for the first time in 17 races.

From fourth on the grid, Rossi completed an all-Yamaha podium in the second Jerez race behind Petronas Yamaha man Fabio Quartararo and Maverick Vinales, who managed to pass his factory teammate on the penultimate lap.

It came after an uncompetitive opening weekend of the season for Rossi at the same track one week earlier, which ended in retirement after an engine alarm went off.

Explaining the turnaround, Rossi said he and his new crew chief for this year, David Munoz, had to persuade certain factions within the Yamaha garage about the merits of deviating from the set-up preferred by Quartararo and Vinales.

"Not just after last race, but all the second part of the 2019 season was very frustrating," said Rossi after standing on the podium for the first time since last year's Grand Prix of the Americas. "I was so slow and I suffered very much. But this time we work in another way.

"We have to work hard because with David, we have to put pressure on Yamaha because sometimes it’s something political. It’s a political problem. We want to change the bike and we don’t give up.

"And from Friday morning I have a better feeling. Sincerely, this time my team helped me a lot, because they give me a light at the end of the tunnel, they give me another bike."

Rossi added that, given he is set to join the satellite Petronas squad next year in a straight swap with points leader Quartararo, it is important for Yamaha to trust his judgement.

"When you ride the same bike as Fabio and Maverick and they are able to be so fast, so strong, Yamaha thinks that I have to ride like them," added the 41-year-old Italian.

"But they need to support me, because I’m here in the factory team and next year I will race with Petronas, so they have to trust me, because I think that maybe I’m not faster [than Vinales of Quartararo] on the track but I can make good races." 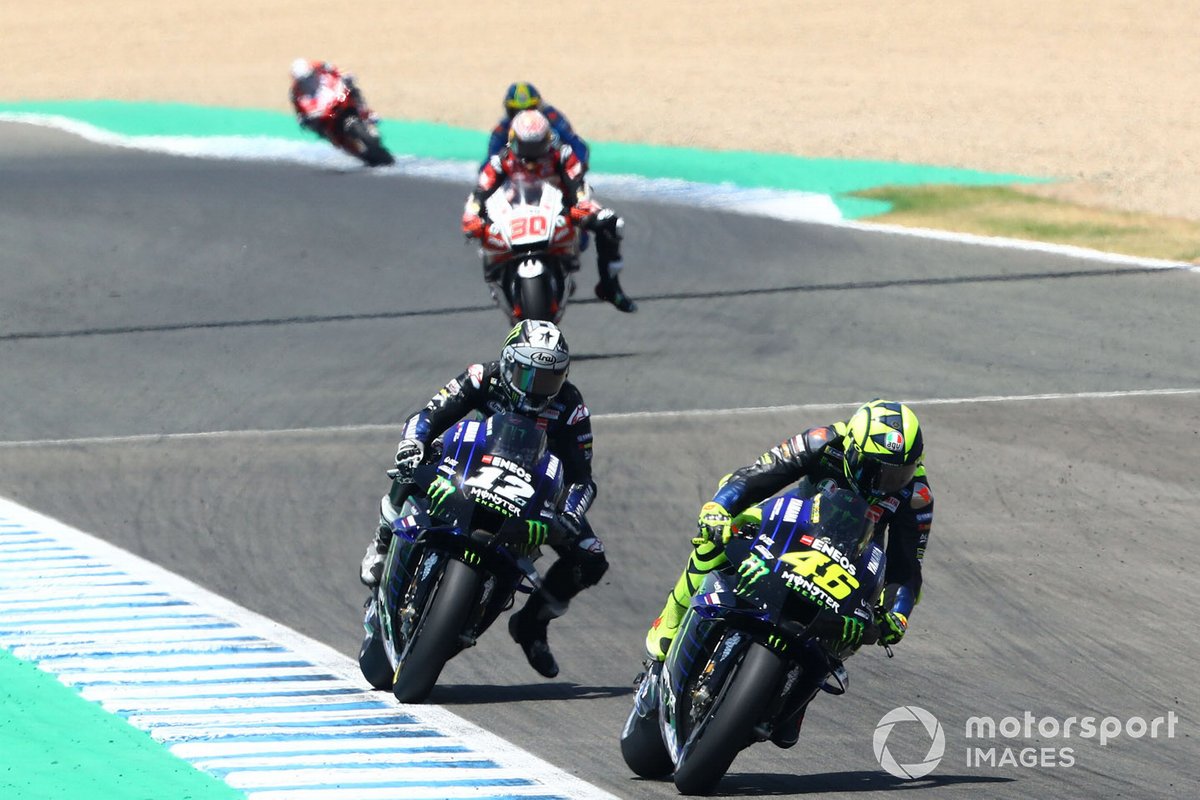 Yamaha team boss Lin Jarvis said the changes Rossi was able to make for the Andalusian GP weekend made the Italian feel like the Yamaha was "his bike" again.

Jarvis explained to BT Sport: "Most of our Yamaha have a similar range of settings, the zone they are working in is pretty much common. But Vale struggled to get to grips with that and to feel comfortable and make it work for him.

"Changing the minds of Japanese engineers sometimes is not so simple, because we have a lot of data and information and the other guys are going fast. So why go in this other direction? But Valentino obviously has a lot of experience and he knows what works for him. He pushed, we accepted and made the change.

"I wouldn’t say it’s resolved all his problems but he feels a lot more comfortable, he feels it’s his bike again and therefore he can ride it better."