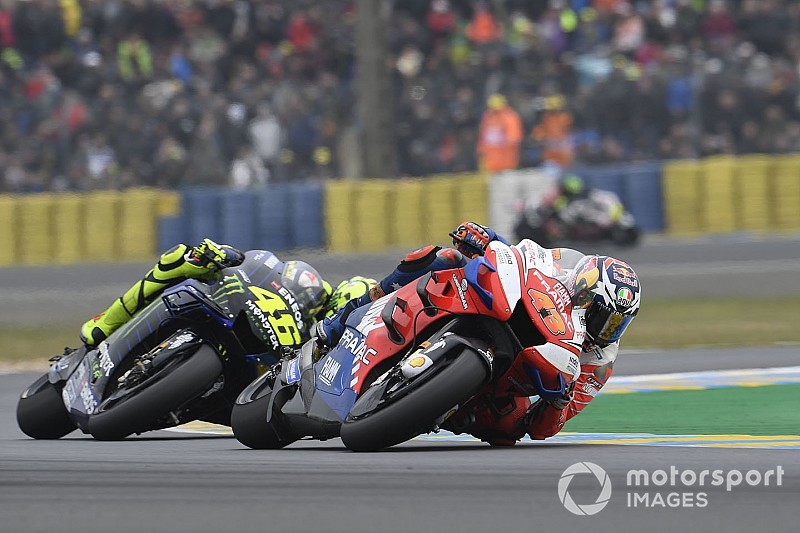 Valentino Rossi says he "suffered very much" on the straights in the 2019 French Grand Prix at Le Mans, with his Yamaha lacking top speed compared to rival bikes.

Rossi had recorded the lowest top speed among the point-scorers in the French Grand Prix, which he ended fifth behind Marc Marquez and the three Ducatis of Andrea Dovizioso, Danilo Petrucci and Jack Miller.

The Yamaha rider was not far from the Ducati trio for most of the race but couldn't get past them, with the Desmosedici bikes enjoying an advantage on the straights.

While Rossi said that Yamaha has improved tyre life and made the bike better to ride than in recent years, he admitted he is now losing out too much on power.

"I wasn't fast enough, I lose too much in the straight and acceleration from the low-speed corners," he said.

"All the race I try to start there, don't lose the slipstream to try to fight for the podium. The podium was my target but unfortunately was not enough for the Ducati.

"The good thing is that at the end I was good, I was able to come back, looks like that in the last laps we have fewer problems compared to last year, this is very positive but is not enough for try for the podium.

"It's like this. We improve tyre life with some different things on the bike, the bike is very good to ride.

"Looks like the others make another step, especially Honda, and now the difference is very big in the straight.

"Is enough that you check the speed in the sheet. In all the race we suffer very much."

While all four Yamaha riders were towards the bottom in the French GP top speed rankings, Rossi pointed out that he was, and usually tends to be, trailing the other M1s in this aspect.

"Unfortunately, what we can improve is that also I am the slower of the Yamahas for some reason so we need to make better.

"But I am always last, second or third to last, very far form the top. It is difficult. In history, from a long time, 2004, never is the Yamaha fantastic in the straight but this year looks like we lose very much."

As engines are sealed for the rest of the season, Rossi fears Yamaha make big top-speed gains but hopes that acceleration, the other traditional weak point of the M1, could still get better.

"The problem is that the engine is this. I don't think that we can improve a lot but this is the situation, we have to give the maximum.

"We can fight to stay on the podium and the bike is good to ride, we have some good things so it depends very much from track to track but this is the reality now.