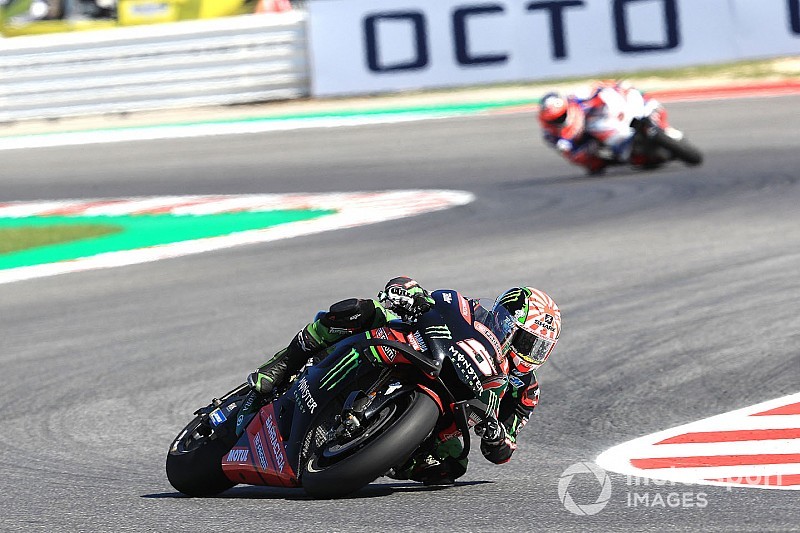 Tech 3 Yamaha rider Johann Zarco says he was having to “fight with my own bike” in last weekend’s Misano MotoGP round as his slump in form continued.

Zarco, who had been targeting the runner-up position in the championship behind runaway leader Marc Marquez after a strong start to the year, has now dropped to seventh following his ride to 10th in last weekend’s San Marino Grand Prix.

The Frenchman has failed to finish higher than seventh since crashing out of the lead of his home race at Le Mans in May, and has fallen behind LCR Honda man Cal Crutchlow in the battle to be this year’s top privateer in the standings.

Zarco quipped that the lack of corner exit speed from his two-year-old M1 at Misano was so acute that he had even questioned whether getting off his bike and running would have allowed him to go faster.

“I know the weak point we have,” he said. “You are going into the corner like the others, you open the throttle exactly the same as the others and you lose time.

“It’s difficult to accept but I have to accept [it] and then keep working and try to find always enjoyment on the bike and a good feeling.

“During the practice we are able to have that feeling more or less but then during the race you have to do many laps in a row, then there is a moment it becomes so, so difficult.

“I am behind the others and [suddenly] I cannot stay with the others. So that’s the point that makes me sad when I’m racing, to feel that there’s no way of pushing.”

He added: “Without Jorge [Lorenzo]’s crash I was 11th, at least if I finish 11th I [want] to finish with some energy [left], but I finished in [10th] position and totally down.

Zarco also denied that his choice of the soft tyres front and rear played a part in him failing to stay on the pace at Misano.

“It was the right choice because I don’t have many options,” he said. “We are too much on the limit and if you take another tyre then you lose grip.

“And if you lose grip the bike becomes impossible to ride, so I don’t want that.”