Second and third row for Yamaha in Brno qualifying 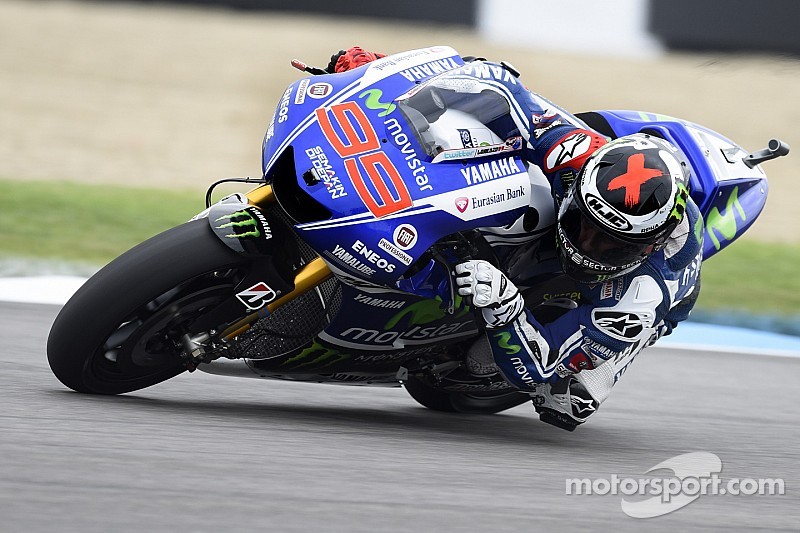 Lorenzo was eager to start the 15-minute qualifying session and the first one out of the pits to ensure a free track for his first stint. His first flying lap of 1.56.318, took him to provisional pole, before being pushed back to sixth place when the pace quickened. With a little more than seven minutes to go he came into the pits for a fresh set of rubber front and rear. With three minutes of the session left Lorenzo had only one lap to show his pace with the softer compound front tyre and rode a 155.815 moving him up from eleventh to sixth.

My finger is not broken; its just a little bit damaged.

It was an eventful day for teammate Valentino Rossi. The nine-time World Champion was right on the pace during Free Practice #4, setting the fastest lap of the weekend thus far before suffering a crash and injuring his left little finger. Rossi had an X-ray at the Clinica Mobile and was declared fit to continue.

During qualifying he took his time to get out on track, giving the other riders a head start. During his first stint, the Doctors best lap of 156.708 saw him move to tenth place before he came in for new tyres with less than seven minutes remaining. Two minutes later he was back and, despite the pain, set a personal best lap of 155.821, shooting him up to the top five before being demoted to seventh in the last laps.

Jorge Lorenzo (6th / 1'55.815 / 6 laps): The lap times are not bad. I had some pretty fast laps even on used tyres. Some days if you cant go a little bit faster it makes a big difference. It could have been worse, because also the riders in seventh, eight and ninth place are very close to my lap times. When we put a soft tyre on the front it gave me much more confidence. Unfortunately it wont be possible to use this tyre for tomorrows race, so we have to work on the bike to give me more confidence with the harder front tyre. I swopped bikes during the qualifying session because we put a special brake on the number one bike and the braking was good, but we lost a lot of time with speed and acceleration, especially on the last corner. We concentrated on the normal bike with our last try and it was better.

Valentino Rossi (7th / 1'55.821 / 7 laps): I was pushing a lot and my pace was fast but unfortunately when entering turn eleven I was a little bit too wide. I was braking hard, trying to enter the corner anyway but I lost the front and damaged my little finger. Its very important for tomorrow that there is no fracture. It seems like there wont be any problem. My finger is not broken; its just a little bit damaged. I think and hope that it wont give me problems during the race. Using the soft front tyre for tomorrow is not an option for me. I think using the hard tyre on the front is better.

Massimo Meregalli - Movistar Yamaha MotoGP Team Director: Jorge has run a good pace for all the sessions however we were unable to make the most of it in the qualifying session and take full advantage of his pace. We will work to make a step for him to improve his feeling with the bike tomorrow morning and he should be ready for the race. With Vale we made a good improvement with the bike and he was pretty satisfied. We are still looking for some more improvements but the level is good. Unfortunately he crashed in free practice otherwise Im sure he would be further in front. He really put in a lot of effort as he had a big, deep abrasion on his hand. Its a shame that we lost the second row for almost nothing.

Smith storms to strong qualifying as leading Yamaha in Brno

Monster Yamaha Tech3s Bradley Smith completed a superbly executed qualifying performance at the bwin Grand Prix České republiky which will see him start the eleventh round of the 2014 MotoGP World Championship from fourth on the grid. The young British rider continued yesterdays positive start at the Automotodrom Brno by opening today with a superb third place finish and as the top Yamaha in the morning practice with a best time of 1'56.780, which saw him sail straight through to the Q2 session.

The 23-year-old proceeded to push further onwards in the dry qualifying shootout and on his sixth and last lap he powered over the start finish line to post a best time of 155.730. In addition, his inspiring lap time was incredibly a mere four thousandths of a second from the front row and his expert performance saw him only two tenths from the circuit best lap. The British star will seek to undertake a lightening start from the front of the second row and then aggressively compete to be the leading satellite bike aboard the Yamaha YZR-M1 in tomorrows race at Brno.

Honestly, I still lack a bit of experience in qualifying...

On the other side of the Monster Yamaha Tech3 garage, Pol Espargaro continued his positive qualifying campaign this year by clinching ninth position, which will see him start Sundays 22 lap race around the 5403 meter Czech circuit from the third row. Following yesterdays noteworthy performance in the rookies first full wet session, the reigning Moto2 World Champion completed this mornings practice with a best time of 156.825 allowing him to slip straight through to the Q2 session before improving his time further in FP4 to strongly finish in fourth.

Espargaro sustained his confident performances as he sought to lower his lap time further in the 15-minute session and then blazed to a best time of 155.899, which was only 0.173 from the front row and three tenths of a second from the pole position time. Tomorrow he will aim to undertake a soaring start and battle to a top five finish once again for round eleven of his rookie campaign in the premier class.

Bradley Smith (4th /1'55.730 / 6 laps): I am very pleased with the qualifying result as it gives me the perfect platform for a strong result tomorrow. Its the first time since the start of the season that we have been back to the level of performance that we had at Qatar and today I was able to score a positive grid position. The team did an excellent job and I must thank my technicians and Guy Coulon for their brilliant technical knowledge plus guidance. In all honesty, I was a bit worried as we seemed to struggle yesterday but its super to be back up to speed and then to top it off by qualifying on the second row.

Furthermore I am really happy with my decision to use the front medium for the Q2 session which was the perfect choice. I am very confident that I will be able to have a good start and then stay at the front with the leading riders, so I am really looking forward to tomorrows race.

Pol Espargaro (9th / 1'55.899 / 7 laps): I am a little disappointed with qualifying ninth after I have ran well in the rankings during the whole weekend so far, including fourth in FP4 so I hoped to be a little higher at the end of qualifying. All of the times today were really close and the distance to the front row was not too far at all, but the competition is high as this is MotoGP. Honestly, I still lack a bit of experience in qualifying because in this class you have to perform your quick lap instantly whereas in Moto2 there was more time and you built yourself up for the attack.

The qualifying result today puts us into a slightly tricky situation and the start will be vital to score a good result here. In terms of tyre choice, I did try both compounds today and I felt confident on either variation, however we will decide on which one to race after judging the conditions tomorrow morning. I would not predict tomorrows race to be an easy one but I am still convinced we can do a good job as my race pace itself is very promising and my aim is still a top five finish here in Brno.

The eleventh round of the MotoGP World Championship, will see the NGM Forward Racing riders Aleix Espargaro and Alex De Angelis take the start respectively from the fourth and seventh row.

First open on the grid, this result confirms one again the quality of the Forward Yamaha package. Espargaro set a lap time of 156.090, just 0.505 from pole man Marc Marquez. Despite the tenth place, the Spaniard was happy with the improvement achieved during the afternoon session and he is confident to make another step forward tomorrow in the warm up to find the best setting for the race.

Teammate Alex De Angelis used todays sessions in dry conditions to continue to understand the Forward Yamaha. He worked on the set up and in the afternoon he was able to ride with more confidence, improving his lap times. He finally finished in 20th position.

Aleix Espargaro (10th / +1'56.090 / 6 laps): We have improved in terms of set up of the machine and this is the most important thing, considering that we struggled a lot with the front during the free practices. We are just five tenths from the pole and less than four tenths from the front row, but we are in tenth position and this will make the race more complicated. This track is fast and we are suffering a bit. We will continue to work in the warm up to find the best set up for the race, as we need a good result and gain the points lost at Indy.

Alex De Angelis (20th / +1'58.948 / 7 laps): Today we continued to work in preparation of the race. We started with a set up close to the one used by Aleix and then we modified it according to my feelings and we finally improved in the Q1 when I started to use a softer fork. Im happy because we were able to improve my rhythm and the lap times. Tomorrow we will continue to work in the warm up. Every single session is very important to understand the bike better.

Marquez pushed all the way for pole position in Brno qualifying