Pedrosa powers to first victory of the season in Estoril

After a race long duel with fellow Spaniard, Jorge Lorenzo (Yamaha Factory Racing), Dani Pedrosa (Repsol Honda) raced to victory at the bwin Grande Prémio de Portugal and with it, claimed his first win at the Estoril circuit in any class. Third was Casey Stoner (Repsol Honda). 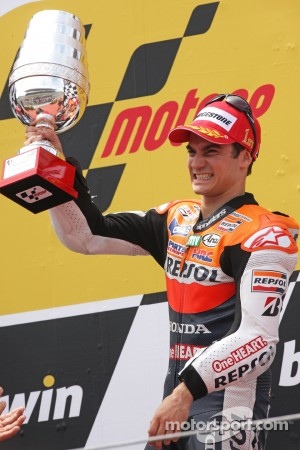 Pedrosa who only recently had surgery on his injured shoulder, had been seemingly pacing himself behind the leader, Lorenzo, until the final three laps, when the Repsol Honda rider, passed the Yamaha down the straight and then delivered a succession of fastest laps to pass the chequered flag first. Pedrosa finished just over three seconds ahead of the reigning MotoGP World Champion and closed the gap on Lorenzo’s lead in the standings to just four points. Pedrosa’s triumph also prevented the pole sitter clinching four successive victories at the Estoril circuit.

Stoner had a lonely race in third and was over seven seconds behind his team mate who won the race. The former MotoGP World Champion has never won at Estoril (one of only five circuits the Australian has failed to clinch victory at). The eyes were all on the battle behind the Australian between Valentino Rossi (Ducati Team) and Andrea Dovizioso. The Repsol Honda rider stayed close to Rossi throughout the race and managed to snatch the fourth place on the very last lap as they crossed the start finish line, by a mere 0.025s. The nine time World Champion’ previous lowest result here in Estoril had been a fourth place from 11 starts, before the pass from his fellow compatriot over the line.

It was a good day for the Monster Yamaha Tech 3 team. Colin Edwards arrived home in sixth position, two ahead of Cal Crutchlow. The British rookie had been involved in a tussle with Hiroshi Aoyama (San Carlo Honda Gresini), but the Japanese rider got the better of the former World Supersport champion. Crutchlow was one of many riders racing following an operation and has continued to pick up points in his first season in the premier class.

Nicky Hayden (Ducati Team) was ninth, after racing with Ben Spies early on and the final place in the top ten went to Frenchman Randy de Puniet (Pramac Racing) who was recovering after an operation on his leg. Toni Elías (LCR Honda) who won here in 2006, was 11th after fighting with Loris Capirossi (Pramac Racing) and edging out the most experienced rider in the field, come the end of the race. 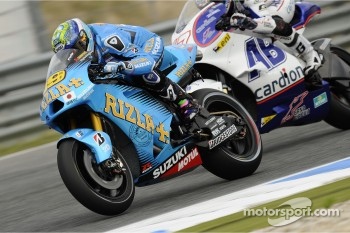 In the first race of the season for Álvaro Bautista (Rizla Suzuki), after missing the opening two rounds, the Spaniard battled through the pain barrier to record 13th place and claim three points, just six weeks after breaking his leg.

Marco Simoncelli (San Carlo Honda Gresini Team) who started from the first row, which was only his second front row start in the premier class, suffered his second accident of the Portuguese weekend on the first lap. The Italian who c crashed whilst in contention for pole position during qualifying, came off at the beginning of the race whilst in third.

Ben Spies (Yamaha Factory Racing) struggled on his second visit to Estoril after several excursions off the track and dropping down to tenth. The American then crashed and was unable to restart the bike.

Héctor Barberá (Mapfre Aspar Team) had scored points in 19 of the past 20 races since he began his MotoGP career, but this race wasn’t to be for the Spaniard after crashing out on the opening lap with a nasty looking highside. Karel Abraham (Cardion ab Motoracing) who qualified ahead of the factory Ducati of Hayden in just his third GP start, had his first non-finish of his debut MotoGP campaign after an early off brought his race to a halt.