Silverstone must be prepared to resurface its track again to safeguard the future of its MotoGP agreement, Dorna boss Carmelo Ezpeleta has suggested.

The blame for the cancellation of last weekend’s was placed on the new track surface by MotoGP race direction, as it failed to drain properly on a day marked by persistent rain.

Silverstone itself has launched an investigation into what went wrong, but managing director Stuart Pringle believes criticism of the asphalt, which was laid in February, is only “conjecture” at this stage.

He also claimed that the riders chose to abandon the meeting while there was still a chance it could take place.

However, speaking to Spanish newspaper AS, Ezpeleta hinted that the future of Silverstone’s MotoGP contract, which runs through to the end of 2020, depends on a new surface being laid.

Asked if events on Sunday had in any way jeopardised Dorna’s agreement with Silverstone, Ezpeleta replied: “If they redo their asphalt and it is homologated, not at all.”

He continued: “The economic losses are of little importance. It’s up to Silverstone, I guess they are going to have to offer refunds or give [spectators] free tickets for next year.

“But I prefer to cancel a GP and not have to regret an accident, rather than the opposite.

“The will of the riders prevailed, but they did not have to convince us of anything, because we thought exactly the same.

“It was the right decision, because the weather didn’t improve until 7pm and there is no question of starting a race so late.”

On the possibility of delaying the race to Monday, Ezpeleta added: “We thought about it, because it was a public holiday in England, but the majority of teams preferred not to do it.

“I don’t quite understand why, but I respect what they say.”

Ezpeleta also suggested that Dorna may start a new commission for checking tracks more thoroughly after resurfacing in future.

It follows FIM Safety Officer Franco Uncini declaring the new asphalt fit for purpose when he visited Silverstone in March, only to conclude it had “degraded” in the interim.

"We'll have to think if we name someone for when a track is resurfaced.” Ezpeleta said. “This can't simply be decided on a dry day by Franco Uncini or anyone. It has to be an asphalt expert to see how it was done.

“We have to consider if it's worth having one or two people approved by the FIM and that that person confirms that the asphalt is good in any condition.

“The fact is that the rain [on Sunday] was not huge, we raced in places where it rained a lot more, like in Japan last year.” 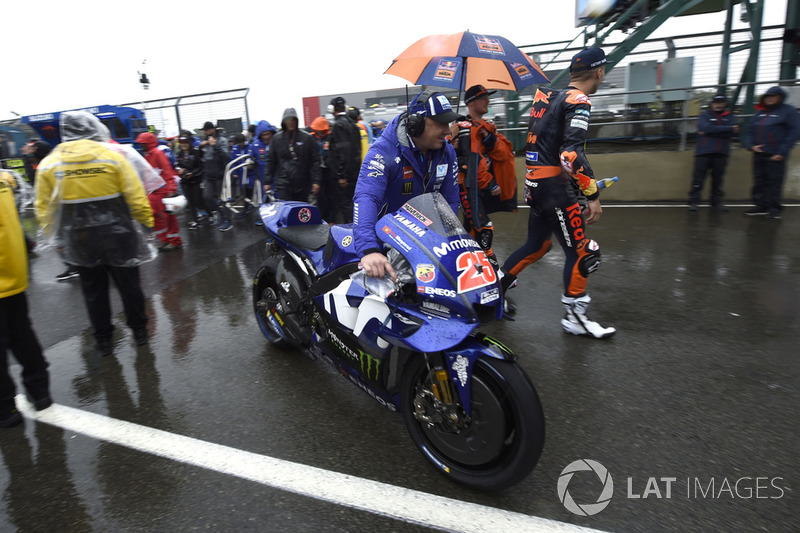 Bikes being pushed off the grid, British MotoGP race 2018