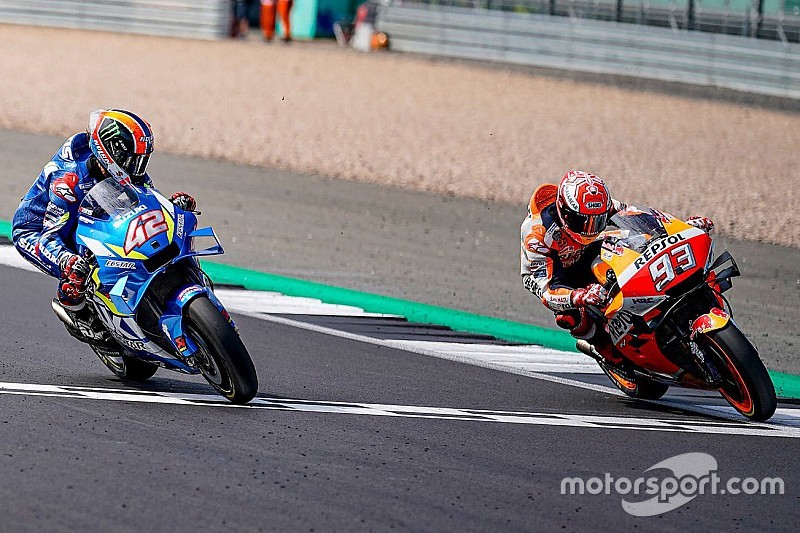 A race-long battle between Marquez and Rins was resolved by just 0.013 seconds in favour of the latter after he undercut the Honda rider coming through the fast right-hander of Woodcote for the 20th and final time.

It marks Rins' second victory of his MotoGP career - his first having come at Austin earlier this year - and a second win in three attempts for Suzuki, following Maverick Vinales' triumph for the same marque at Silverstone three years ago.

Vinales finished just 0.6s adrift of the lead pair in third for Yamaha, while Valentino Rossi was a distant fourth place after starting second on the grid, 10s down on Rins.

Marquez converted pole into an early lead ahead of Rossi, but behind the lead pair there was drama as Fabio Quartararo and Andrea Dovizioso were involved in a violent incident.

Quartararo, the only rider starting in the top six to opt for a medium front tyre, suffered a high-side coming out of Copse, and Dovizioso was powerless to avoid the Frenchman's stricken Petronas SRT Yamaha, which acted as a launch ramp for the Ducati.

Both riders were initially cleared of serious injury, but Dovizioso was transported to hospital after it emerged he had briefly lost consciousness in the accident.

The incident helped promote Rins, who had started fifth, to third place, and on the second lap the Spaniard cleared Rossi for second.

Rins then spent the majority of the race closely shadowing Marquez, the first real flashpoint of their fight coming on lap nine, where Rins got a better exit out of Copse and passed Marquez - only for the pair to swap back along the Hangar Straight and into Stowe.

Marquez was never able to shake off Rins however, and while the latter suffered a wobble at Club on lap 17 that cost him around half a second, by the end of the lap he was right back on the reigning champion's rear wheel.

Rins was close to attempting a move at Vale on the penultimate lap, but couldn't find a way through, but several corners later at The Loop he cut underneath Marquez. But once again, the superior power of the Honda allowed Marquez to retake the lead along the Wellington Straight.

At the start of the final lap, Rins had a look around the outside at Woodcote in a foreshadowing of his race winning move, although on this occasion Marquez forced his rival out on to the kerb and held the advantage.

Rins stayed close throughout the final lap, getting a strong exit out of Luffield and then diving beneath Marquez into the last corner to take a popular victory.

With Dovizioso crashing out, Marquez nonetheless extended his points advantage to 78 with seven rounds remaining of the season.

Behind the lead pair, Vinales had picked off Rossi as early as lap seven, but didn't quite have the pace to catch up before running out of laps and having to settle for third.

Pol Espargaro headed KTM's challenge in ninth, while teammate Johann Zarco ended up taking out the Tech 3 bike of Miguel Oliveira in an ill-advised move at The Loop.

Andrea Iannone was 10th for Aprilia, also matching his best finish of 2019, although Aleix Espargaro was on course for the position until a late mechanical problem ended his race.

Suzuki stand-in Sylvain Guintoli picked up four points for 12th, while Jorge Lorenzo was 14th on the second Repsol Honda, having yielded in a race-long battle against Hafizh Syahrin in what was his first start since June's Barcelona race.

Takaaki Nakagami (LCR Honda) crashed out of a top 10 place but remounted and finished 17th.

Silverstone MotoGP - the race as it happened