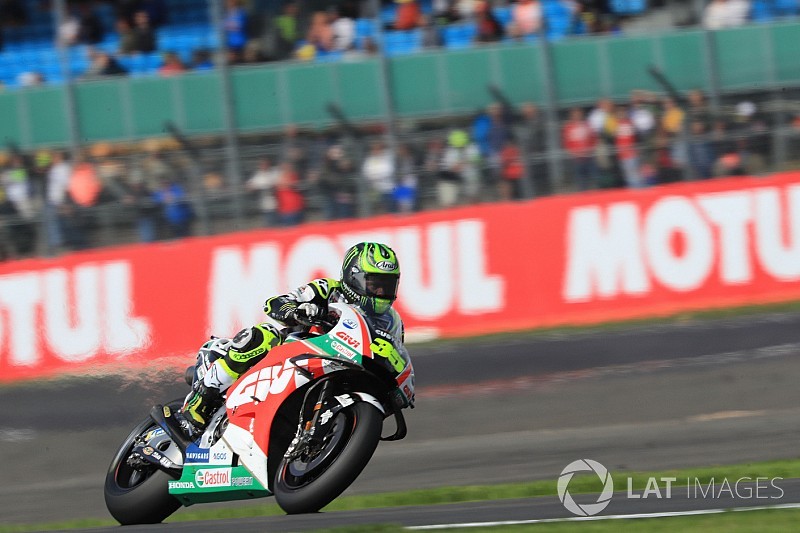 Damp patches on a mostly dry Silverstone circuit meant combined standings improvements were few and far between, with Crutchlow snatching top spot after a late flurry of laps.

Honda's Marc Marquez set the benchmark at 2m04.864s in the opening stages of the session, with FP1 pacesetter Vinales just 0.119s adrift on the Yamaha.

LCR's Crutchlow took over from his Honda stablemate moments later by 0.171s, though Vinales would demote the Briton with a 2m03.458s.

Marquez and Vinales traded top spot with just under half an hour to go, with the latter creeping ahead by four tenths.

Friday's overall pacesetter Andrea Dovizioso cut Vinales' advantage to just over a tenth on his Ducati, though the Yamaha rider steadily built his gap back up to over half a second with a 2m02.176s lap as the session entered its final 10 minutes.

The first major improvement on the combined times came moments later, when Pramac rider Petrucci – who felt dangerous riding from Jorge Lorenzo denied him a place in the top 10 in FP2 – leapt up to 10th overall and second in session with a 2m02.257s.

Vinales re-established his position at the front of the pack with a 2m02.088s, though this was beaten first by Jack Miller on the sister Pramac bike, before Crutchlow edged ahead of his former LCR teammate with a 2m01.866s.

Petrucci jumped back up to second on his last attempt to secure a Q2 place with Crutchlow, while Miller headed the Yamaha trio of Johann Zarco, Vinales and Valentino Rossi – all of whom secured Q2 spots.

Marc VDS rider Franco Morbidelli – who was officially announced on Friday as joining the SIC Yamaha team next year – was seventh on his Marc VDS Honda, but his 2m02.321s was not good enough to push him into Q2.

13th-placed Andrea Iannone (Suzuki) and Lorenzo in 15th were the final two riders to secure Q2 placements, both by virtue of their FP2 times.

Farm corner claimed two victims in FP3, with Takaaki Nakagami and Alvaro Bautista crashing through the fast left-hander. The former fell again at the end of the session, though this time two turns later at The Loop.

Mexico will not join MotoGP calendar in 2019