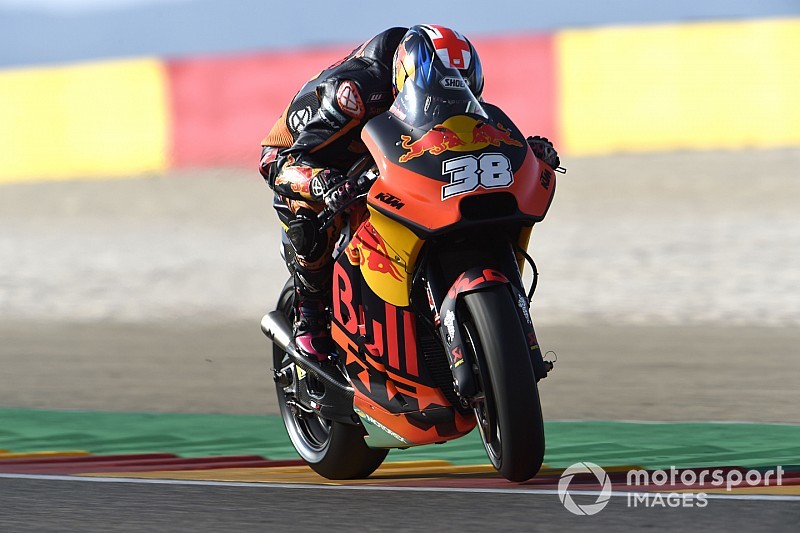 Pol Espargaro finished ninth twice during KTM’s maiden season in MotoGP last year, but the team couldn't do better than 10th so far in 2018, as the introduction of a new package, set to be used this year, was delayed.

However, KTM has finally brought the new bike, now referred to as a 2019 prototype, two races ago at Misano.

While the team’s best result since has been only a 13th place at Aragon, Smith feels the new package has more potential than the previous one.

"We know where we continually need to improve," said Smith. "It is the second race with this new package, and we got better than what we did in Misano.

"In Misano we really struggled and we already got on top of that this weekend, the next step is to make it strong all through the race distance and that's all we can do.

"We keep getting better, I can't be negative about that, we just keep getting stronger, at some point that top-eight [finish] is gonna come in these final five races, I believe it."

Smith, who will be replaced by Johann Zarco next year and will instead join Aprilia as a test rider, feels that KTM's lack of progress this year has been largely due to having reached the full potential of the old bike.

"I think what happened was, we got the maximum out of our old package, and then we were kind of handcuffed for a couple of weekends.

"Now we have the new one, we see the potential there, and then we're just gonna get better in my opinion."

Smith ended the Aragon Grand Prix 28.8s behind the winner, which leaves the KTM with a 1.25s per lap deficit.

"It [the gap] is what it is, the level of those boys at the front, they keep on getting stronger and stronger.

"But that's normal, the manufacturers are fighting against each other and they keep on doing what they're doing.

"It is still too big, because it is still over a second a lap, but it is where we are.

"We are 1.2-1.3 seconds a lap slower than the top guys at the moment and that is what we have to accept at the moment but it's what we're working on."