Smith hits out at “reckless” Bradl after Brno pile-up 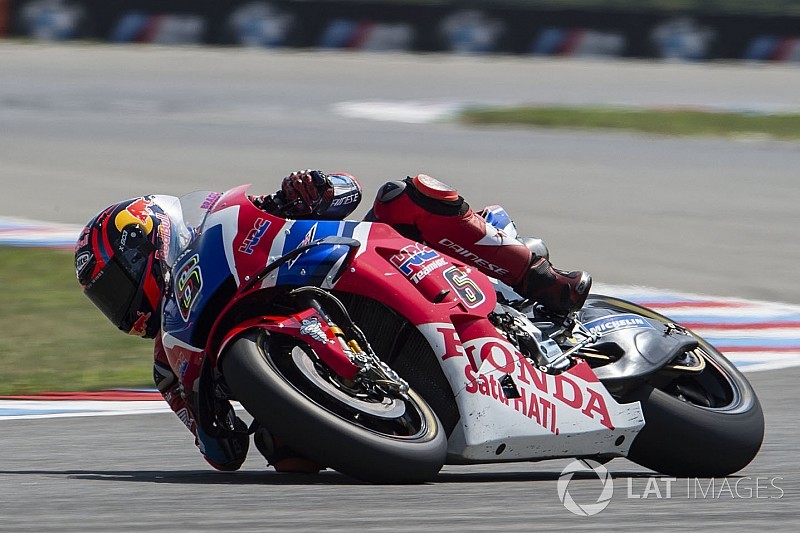 Bradley Smith has slammed Stefan Bradl for his “reckless” riding after the Honda rider took him out on the opening lap of MotoGP’s Czech Grand Prix.

Wildcard rider Bradl was blamed for causing the three-way melee at Turn 3 that claimed Smith’s KTM and the Yamaha of Maverick Vinales on the first lap of the Brno race.

While he was unavailable for comment after the race on Sunday, Smith addressed the media on Monday after taking part in post-race testing as KTM’s only rider, with teammate Pol Espargaro absent due to injury.

“Stefan lunged, I think he tried to overtake four people up the inside, tucked the front and then skittled both me and Maverick,” recounted Smith.

“I saw him go down, slid into me and both of our bikes hit Maverick just on the rear swinging arm, down he went.

“I was a little bit baffled by Stefan’s comments that he didn’t know what had happened, so I was looking for a video or a picture to refresh his memory.”

Asked if he was surprised that the stewards took no action, Smith replied: “Very surprised.

“I believe [he was given] a warning, and then he’s taken two guys out. And if you listen to [Jack] Miller’s comments, it was clear that it was a reckless move.”

LCR Honda rider Cal Crutchlow was well ahead of the incident of the time, but criticised stablemate Bradl for taking a gamble on the opening lap for little apparent gain.

It’s understood Bradl was using a carbon swingarm, and the British rider hinted that he had been set to test this on Monday until the part was damaged in the first-lap crash.

“He was absolutely out of control,” said Crutchlow of Bradl. “He basically tried to pass on the grass on the inside. There are tyre marks on the inside, red marks where he's gone down.

“He could have just rode around, done a solid race and got some information for Honda, not cleaned everyone up. I'm just disappointed he wrecked something maybe that I could have had.”