Stoner: I could have beaten Marquez in straight fight 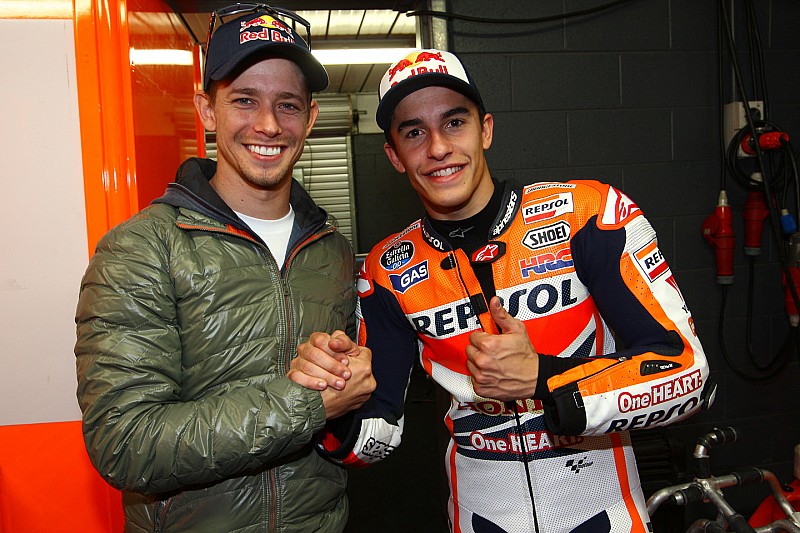 Casey Stoner believes he would have been able to beat Marc Marquez in a straight fight, had he not chosen to retire from MotoGP before the Spaniard made his debut.

Two-time world champion Stoner decided to hang up his helmet at the end of the 2012 season, aged just 27, with Marquez stepping up to take his place at the Repsol Honda team the following year.

The Spanish rider went on to seal his maiden premier class crown in his first season before adding further triumphs in 2014 and 2016, and is strong favourite to take a fourth title in this weekend’s Valencia season finale.

However, Stoner reckons that the calibre of the riders he beat during his career means he would have also been able to come on top against Marquez, had their top-level careers overlapped.

“People always ask me if I could beat him [Marquez], and there a lot of things that suggest I could,” Stoner said in an interview with Gazzetta dello Sport.

“I won against [Jorge] Lorenzo, Valentino [Rossi], [Andrea] Dovizioso, and they have all beaten him. So there’s no reason to say I couldn’t have done also.

“And like Dovizioso is doing now, I could have fought with him for the title.”

Stoner rejoined Ducati at the start of 2016 to take up a test and ambassadorial role with the Italian manufacturer, declining the opportunity to make a wildcard race appearance in Austria.

The 32-year-old was eager to reiterate he has no regrets about choosing to retire when he did, and that he is not struggling to keep himself occupied between his test duties and his family life.

“I’m a test rider and someone who is very happy with his life,” added the Australian. “I am happy that I don’t have to put up with the stress of racing.

“I’m enjoying spending time with my family. I’m always doing something, I don’t get bored. I’ve never regretted the things I did, like deciding to retire.

“I don’t need it [competition] anymore. I started racing when I was four years old and I had a longer career than many people.”

Stoner also took the chance to refute rumours of his relationship with Ducati cooling, underlining that plans for his 2018 testing programme are already being made.

“It’s not true,” he said. “We’ve already planned the first test of 2018, and then we’ll see [about future tests] depending on how development goes.”