Double MotoGP race winner Alex Rins says Suzuki is “where I wanted to be” with its new bike after the first pre-season test of 2020 in Malaysia.

Rins ended the test third overall with a lap just 0.101 seconds off the pace, while teammate Joan Mir was a further 0.382s adrift in 11th on the combined timesheets.

However, both completed some of the strongest race runs of the entire field on the final day, with Rins’ pace in particular grabbing the attention of rival teams.

Commenting on his test programme, which included trying numerous GSX-RR chassis, suspension components and electronic set-ups, Rins noted the outing was “positive” – not least as he was able to extract more performance from a fresh tyre on qualifying runs.

“We tested chassis, two or three chassis, suspension items from Ohlins, tyres from Michelin, also some electronic things on the bike, and sincerely [everything] was positive," he said.

“The first two days I was quite happy. And today [Sunday] with the new tyres I was able to do a fast lap and this was important for us.

“Also we did a comparison in seven laps with the standard chassis and the new one, and I was able to ride all the laps in [1m]59s, and a little bit more comfortable with the new one.

“Now the engineers are analysing the results, but for sure in Qatar we will try to try the same things to confirm that in another track it's working well.”

Adding when asked if he was more optimistic after the test, he stated: “Well, for sure. We are where I wanted to be be.”

Qualifying proved a real issue for Rins in 2019, as only managed on four occasions to put his GSX-RR into the top six on the grid and only once on the front row.

Mir echoed Rins’ enthusiasm over the new bike, and in particular the new chassis, which he says is “better in all areas” than the one he raced last year.

He did note that Suzuki’s new engine is still missing top speed, but feels any deficit “looks like nothing in a lot of ways”.

“Top speed is not our strongest point, probably this is one [thing that needs to be improved],” said Mir, who had a minor crash during his long run on Sunday.

“But well, here in this track, in these conditions, [our struggles] looks like nothing in a lot of ways, so this is really important. I hope that in Qatar we struggle like here, not so much.”

Suzuki team boss Davide Brivio has admitted that the Hamamatsu marque won't have a satellite team until 2022 at the earliest, ruling out extra GSX-RRs being on the grid for 2021.

Avintia's decision to extend its partnership with Ducati left Suzuki with no plausible customer teams, as all the other privateer squads have deep ties with their existing manufacturers.

Team boss Davide Brivio told Motorsport.com: “We have been talking about satellite equipment for a long time, but we will postpone it a little more.

"Suzuki's approach is to wait for 2022, which will be the date on which the new contract with Dorna will start. We are not yet preparing, as first we must make an agreement with one of the teams that will have a place on the grid." 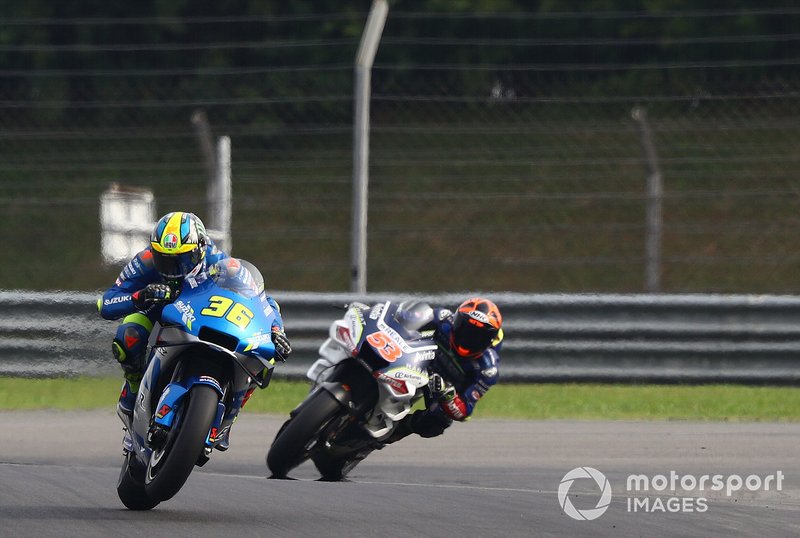 Suzuki expresses desire to continue with Rins in MotoGP for 2023