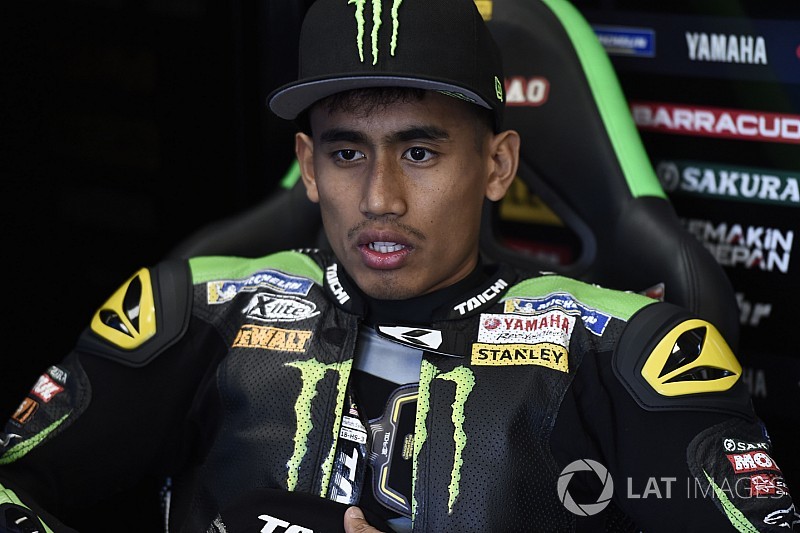 Tech 3 boss Herve Poncharal has criticised his rider Hafizh Syahrin for circulating on track over 10 seconds off the pace during practice for this weekend's Misano MotoGP round.

Syahrin had a tough Friday at Misano, ending both FP1 and FP2 in 25th, only ahead of MotoGP debutant Christophe Ponsson, and crashing in both sessions.

He was 2.9s of the pace in FP1, during which he completed two runs on a medium rear tyre, and was particularly struggling during a few laps, going over 10 seconds slower than pace-setter Andrea Dovizioso.

When asked what Syahrin's problem was, team boss Poncharal was unable to give an explanation.

"When you face this kind of struggling, you would always like to know what's happening, in order to solve it. Honestly, I don't know," he told MotoGP.com.

"I will always be honest and clear, this morning apart from a small technical problem on the bike, he was in between sometimes 11 and 17 seconds slower each lap, which is not normal.

"I had a talk with him after, I wanted to tell him, if there is something wrong on the bike or you don't feel good on the bike, come in, and ask the team to work on the bike.

"To do laps more than 10 seconds to the first is absolutely no meaning, you lose the rhythm, you lose everything.

"This is unbelievable [that] sometimes you have to tell professional rider basic things like that."

Syahrin, who will continue with Tech 3 when the team switches to KTM bikes in 2019, had a strong start to his rookie season and is in contention for rookie of the year honours.

However, he has hit a mid-season slump and only finished higher than 14th once in the past five races.

Poncharal also failed to answer for Syahrin's drop in form, feeling the rider "doesn't seem to be really here".

"I don't know, for a few races it's been struggling more than in the beginning of the year," added the Frenchman.

"Honestly I don't know, I've been talking to his management, we talk again with him tonight and the management, but he doesn't seem to be really here, and to be really, clicking with the team, with the bike."

Syahrin admitted that he's been lacking confidence since Brno when asked about his Misano practice woes.

"I am starting to struggling from Brno until this race," he said. "I don't know why. We lose the front feeling, that is why I don't have the good feeling with the bike at the moment in the front wheel.

"When I release the brake and the bike doesn't help me for turning, I need to keep the brake until the corner so is quite slow for me.

"We have a talk about this [with Herve], he say try to work hard, no need to stress, try to enjoy, I try to take this motivation and try to use.

"At the moment I am, I don't know why I am struggling with the bike and I really want to be faster so that is why I put so much stress on the bike, or myself."