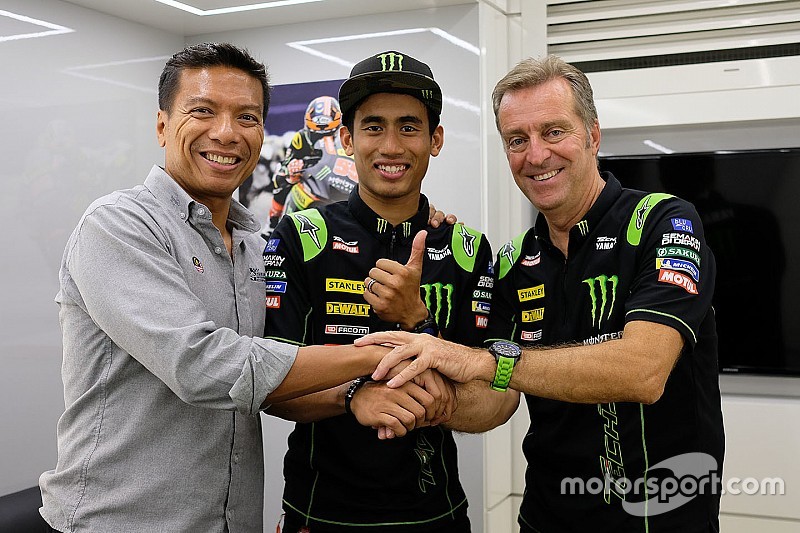 Tech 3 has completed its line-up for its first MotoGP season with KTM bikes in 2019 by re-signing Malaysian rookie Hafizh Syahrin.

The French outfit will end a long-standing partnership with Yamaha in favour of a deal to run factory-specification KTM RC16 bikes next year.

It has previously announced KTM junior Miguel Oliveira as one of its 2019 riders, and has now confirmed Syahrin alongside the Portuguese.

Syahrin, who spent four full seasons in Moto2 between 2014 and 2017, was a late addition to this year's MotoGP grid, after Jonas Folger's illness and subsequent decision to sit out the 2018 season forced Tech 3 into a scramble to find a replacement at short notice.

"I’m incredibly happy to get this chance, I even feel close to crying for joy," Syahrin said.

"I will work hard for 2019 and I’ll be better prepared, as this [deal] is not as surprising as this season."

While Tech 3's other rider Johann Zarco, currently fifth in the standings and with a factory team KTM contract for 2019-20, has led the outfit's campaign thus far, Syahrin has been quietly impressive on the team's other Yamaha YZR-M1.

The Malaysian sits 16th in the standings - as joint-top rookie with Moto2 champion Franco Morbidelli - and posted a best finish of ninth in Argentina.

"Since Hafizh jumped on our MotoGP bike, it’s been like a dream, every single day, because he’s been very fast and a lot faster than some people were thinking and we’ve been very proud of what he did," Tech 3 team boss Herve Poncharal said.

"I know it was a great achievement for a Malaysian rider to be the first one of his country arriving in the MotoGP class. For his first-ever MotoGP race, he scored points and since that day he has been consistently battling for the top rookie spot.

"Apart from that, Hafizh is a very special character. He is a very nice young man, very well-educated, very humble, very respectful of everything, hard-working, wanting and wishing to learn a lot, which is what he is doing, and a very funny guy, too, a fact I like a lot.

"From almost day one we started to work with him, I wanted to give Hafizh a second year, because year one is important to learn, but the second year is maybe even more important to prove yourself.

"I think we got the best rider, we could have picked for our 2019 line-up and I’m quite sure that Miguel Oliveira and Hafizh Syahrin will be a strong package of new talented and ambitious riders."

The Briton, who mentioned Tech 3 as an option after it came out that he would be replaced by Zarco, said in Mugello he was likely to call time on his racing career if he couldn't find a way to remain on the MotoGP grid.

Honda announces Lorenzo alongside Marquez for 2019-20