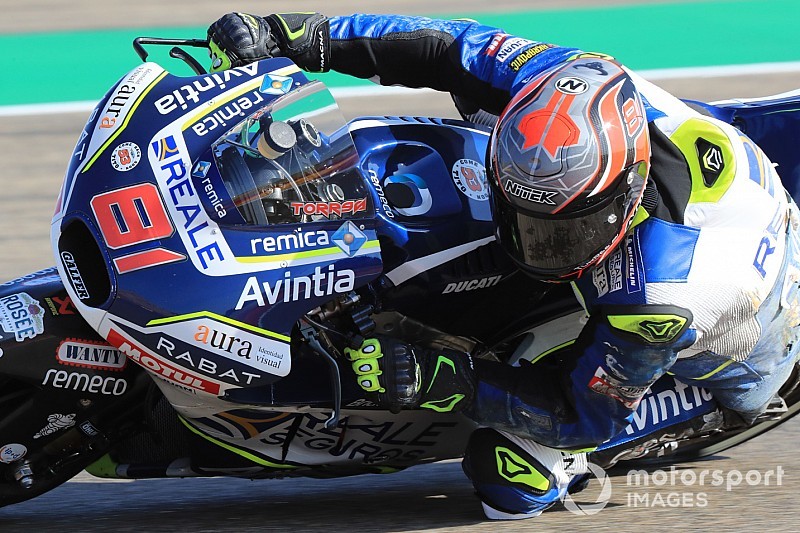 Jordi Torres will continue to fill in for the injured Tito Rabat at Avintia Ducati for this weekend's Thailand Grand Prix after making his MotoGP debut at Aragon, the team has confirmed.

Rabat was seriously injured during the British Grand Prix and has missed the last two races.

Avintia first made the controversial choice of replacing Rabat with Christophe Ponsson at Misano and then Torres at Aragon.

World Superbike regular and former Moto2 rider Torres started and finished his first ever MotoGP race in last place, but was only 0.65sec slower than Simeon in qualifying and only half a second slower in the race.

While Rabat aimed to return for Thailand, despite being released from hospital last week, he remains unfit to race, and so Torres will race again. The Spaniard will ride the team's Desmosedici GP16 as Simeon gets the '17 spec bike.

Torres hopes to take advantage of his experience at Buriram, a track at which MotoGP is racing for the first time, but where WSBK has been visiting for the past four years.

"After the great experience of Aragon, where I had to absorb a lot of information over the weekend to adapt to my riding style to the MotoGP category, it's fantastic to have another chance to get back on the bike in Thailand," said Torres.

"I know the circuit very well, because we have been racing there in the last four years of the World Superbike championship. It's a track that I like and I where I had good races.

"There are many things that I figured out in my head and now it's time to apply this knowledge to the bike.

"Let's see if I can ride more smoothly and if I can score a decent result on Sunday."