Marc Marquez added another pole position to his record books during today’s qualifying session at the Mugello circuit for the Gran Premio d’Italia TIM with the Repsol Honda rider taking the top time ahead of Andrea Iannone for the Pramac Racing team while Jorge Lorenzo also secured a front row start for the Movistar Yamaha team. Marquez’s time of 1m 47.270s with Iannone just 0.180s and Lorenzo 0.251s off the pole sitter.

I'm very happy to have taken this pole position at a track that I found very difficult last year.

Starting from 4th place will be Dani Pedrosa with the Repsol Honda rider setting a 1m 47.584s lap time while Pol Espargaro was pushing hard but crashed during the session and the Monster Yamaha Tech 3 rider starts from 5th place with a best time of 1m 47.612s. Cal Crutchlow had a better than normal qualifying session with the Ducati Team rider in a 6th place start with his best lap time of 1m 47.659s with his fellow countryman Bradley Smith on the front of the third row with a 1m 47.681s lap.

Andrea Dovizioso will start from 8th place for the Ducati Team with the Italian rider’s 1m 47.754s lap better than that of LCR Honda’s Stefan Bradl with a best time of 1m 47.765s while Valentino Rossi had a less than perfect session with the seven times MotoGP champion starting from a lowly 10th place with a 1m 47.791s lap ahead of Alvaro Bautista (GO&Fun Honda Gresini) in 11th and Aleix Espargaro in 12th for the NGM Forward Racing team with a best time of 1m 48.218s. 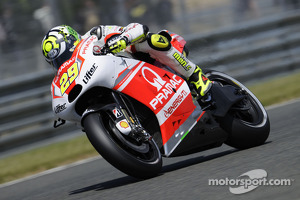 Yonny Hernandez narrowly missed out on making it into Q2 and the Energy TI Pramac Racing man starts from 13th on a best time of 1m 48.722s with Scott Redding in a 14th starting position for the GO&Fun Honda Gresini team and the British rider starts ahead of Michele Pirro for the Ducati team with his best lap of 1m 48.794s enough to start from 15th ahead of Karel Abraham for the Cardion AB Motoracing team. Hiroshi Aoyama will start from the middle of row six with the Drive M7 Aspar rider’s best lap of 1m 49.505s better than that of Colin Edwards who starts from 18th with a 1m 49.780s lap.

Hector Barbera starts from 19th for the Avintia Blusens team with a best time of 1m 49.932s with Michael Laverty in a 20th place start for the Paul Bird Motorsport team (1m 50.505s). Mike Di Meglio will start from 21st on board the Avintia Racing machine with a best time of 1m 50.515s while Broc Parkes starts from 22nd on the second of the Paul Bird Motorsport team (1m 50.875s) and Michel Fabrizio in 23rd for the Octo IodaRacing Team. Nicky Hayden failed to set a qualification time with the Drive M7 Aspar rider ruled himself out of taking any further part in the race weekend due to severe, and unexplained, wrist pain with the American rider due to undergo exploratory surgery next week.

Speaking afterwards, Marquez said, “I'm very happy to have taken this pole position at a track that I found very difficult last year. I've felt good on the bike right from the opening practice session this time around, and this shows that we are working well this season - because in 2013 it was much harder to be up at the front. As for the race, it will be difficult to break away and do what I've been doing up to now, because at this track you tend to ride in a group and things are more tightly packed. However, I will try to give 100% in order to fight for the victory.” 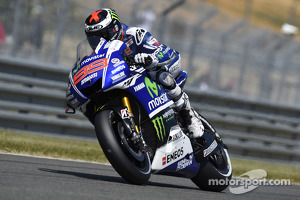 Iannone was thrilled to take the first front row start for his team and said, “I am very happy to have gained the first row for the first time in MotoGP. I like this track a lot, in this circuit I feel at home. I know I can do well and be able to maintain a good pace because in the past I had good results on this track. I thank the team and Ducati for the support they give me.”

Securing the front row start that has eluded him for so long, Lorenzo was upbeat speaking about the race ahead. He said, “I’m satisfied with third place because it’s important to start in the first row here to try to avoid some problems with the first laps and be with the front group. I feel like it's a second place because Iannone has extra soft tyres that can maybe get some extra tenths. I’m happy with the lap time, but more I’m happy with the consistency and the work we’ve done with the bike. My physical condition is getting better as well so I’m happy. Circumstances are different to last year so it’s more difficult to be in front, but little by little we adapt to be as competitive as possible.”