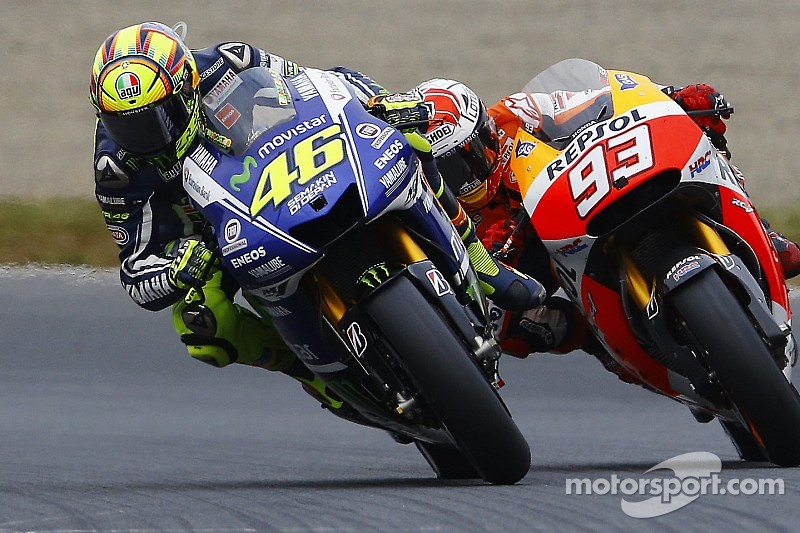 Valentino Rossi won for the 71st time in MotoGP this past weekend.

Valentino Rossi has done it again. The legendary MotoGP ace won for the second time in three races this season, moving away from Marc Marquez in the championship standings. In both victories, Rossi came from eighth on the grid to take the checkered flag from all challengers.

The Repsol Honda rider started the race Sunday from pole position, but Yamaha's Rossi quickly made his way through the pack and towards the reigning champion. By the end of the race, they were locked in a head-to-head fight for the win.

I overtook him in braking, but he is a rider who is all or nothing

Rossi was able to maneuver by with the white flag in sight, but Marquez tried to cut back under him and contact was made. Both riders avoided disaster, but only momentarily as Marquez was suddenly thrown to the ground as his bike skid down the track without its pilot.

Rossi rides through the field

Following the thrilling finish, Rossi told reporters, "When I saw Marc start with the red, I knew that he would try to push at the beginning. I made a great start but on the first corner, Iannone pushed me on the outside. Step-by-step, I came back and when I arrived in second, Marc had a little more than four-second lead."

"Catching him lap-by-lap, I could see him far away but coming closer-and-closer, it was a great taste!" Exclaimed Rossi.

On the pass and contact, "I overtook him in braking, but he is a rider who is all or nothing. He touched me in the corner, then he touched me again as I was accelerating. I think he made a mistake and he crashed. It's a shame because it could have been a great fight on the last lap."

"In three races, we have demonstrated we can be competitive everywhere and fight for the championship,” the Italian concluded. He now leads countrymen Andrea Dovizioso and Andrea Iannone as Marquez fell down to fifth in the standings, 30 points adrift of the lead.

His comments on Marquez's win or bust style are not without merit. We've seen numerous occasions where the 22-year-old has made some daring moves in his young career, which have certainly helped him attain two MotoGP World Titles in as many years.

When you're going up against the likes of Valentino Rossi though, that mindset might actually prove detrimental to his run at a third championship in succession, a feat last accomplished by 'The Doctor' himself.