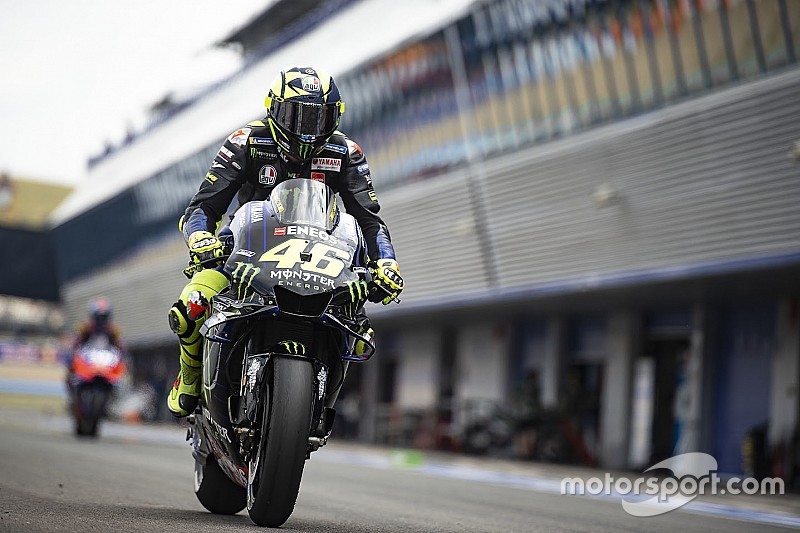 MotoGP legend Valentino Rossi remains convinced that the 2019 Yamaha bike is more competitive than last year's version, despite having been less competitive at Jerez than hoped.

Having featured firmly in the podium hunt in the first three races of the season, Rossi could do no better than sixth from 13th on the grid at Jerez, a track that has exposed the M1's bike weaknesses in recent years.

But the result did not knock Rossi's confidence about his prospects for the year, although he did reiterate Honda rider Marc Marquez's current imperious form is a worry for the title race.

“We are stronger than last year," said the Italian. "The way is long, the challenge is very high, but we work in a good direction. I'm not fully happy for sure because I hoped that also in Jerez, that is a difficult track, we could fight for the podium, but at the end I was a bit more slow.

“But we are there, we are nine points behind, also [Alex] Rins is very strong, also [Andrea] Dovi[zioso], but looks like we can fight for try to make some podiums and try to win some races.”

Rossi was left wondering whether he should've copied his podium-finishing teammate Maverick Vinales' choice of the medium front tyre instead of running the hard – but also believed that missing out on Q2 made his weekend “more difficult”.

“I was never very strong during all the weekend, at the beginning I struggle with [Jack] Miller, but because I was not strong enough to overtake," he admitted.

“Maybe if I go straight to the Q2 I can start in the second or third row, and if I start more in front, I can stay for me with the group of the two Ducati and Maverick, around them.”

Though Rossi finished a place higher at Jerez in 2018, this was aided by a three-bike crash involving Dovizioso, Jorge Lorenzo and Dani Pedrosa, and Rossi insisted his 2019 showing was stronger.

“I don't know what we had to expect here in Jerez, I hoped in my heart to be strong like in Austin, for example, unfortunately we struggle a bit more, I was less fast," he said.

“But we have also a lot of good things because also if my position is worse than last year, my race was a lot better.

“Last year I finished fifth but because I have a lot of crashes in front. And the pace of the race [this year] was very, very, very fast, I was like 25 seconds [actually 32 seconds] faster than my race last year, the gap from the first position is less.

"I feel more comfortable with the bike and especially in the last laps I was fast.”