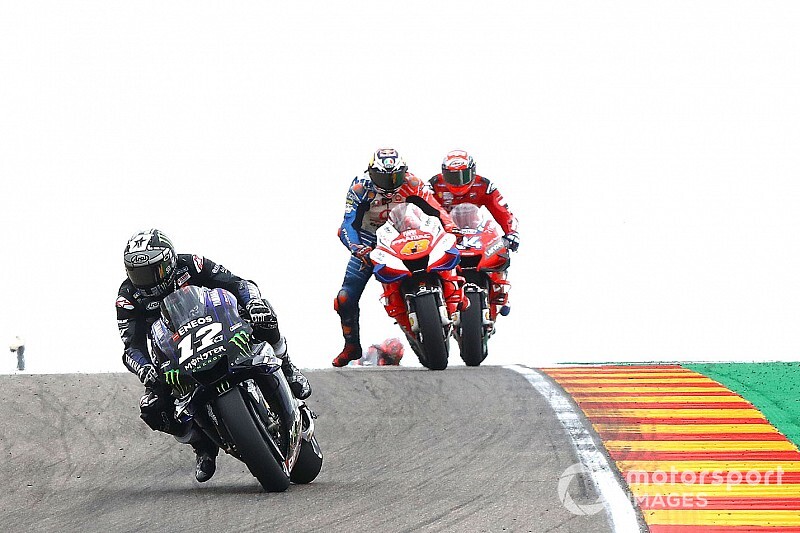 Maverick Vinales says the Yamaha MotoGP bike’s power deficit relative to the Ducati meant he “had no chance” to defend his podium position in the Aragon Grand Prix.

The works Yamaha man climbed to second ahead of Pramac Ducati’s Jack Miller in the early stages of the 23-lap race, and was able at one stage to put a second between himself and the chasing pack, albeit a long way back from eventual winner Marc Marquez.

However, Vinales lost grip in the closing laps and was reeled in first by works Ducati rider Andrea Dovizioso, before Miller snatched third away from him at the start of the final tour.

Dovizioso had a near-8km/h speed advantage over Vinales on the back straight, and Vinales felt Miller would have done the same thing had he not made a move stick at Turn 1.

“I had no chance [against the Ducatis on the straight],” commented Vinales when asked how important it is now for Yamaha to find more engine power.

“Even if I was able to keep Jack behind [on the last lap], he was able to overtake me on the straight. So I got no chance to fight with Jack or Dovi.

"I tried my best as always, I think we did a good race. Last year here it was a disaster [Vinales was 22 seconds off the win in 10th], and this year we were close to second.

“As I said, we need to keep working, it’s important to understand the way to go."

Vinales said that after sampling the new exhaust raced by Valentino Rossi at Misano in practice, he decided to race the same-specification bike as he used in Italy.

“It’s true with the new parts I gained quite a lot of speed, because in FP4 I was fifth in [the] top speed [charts]," the Spaniard said.

“So, I gained a little bit more, but we lost in other places. So, still, we need to understand how to work with [the new parts].”

Earlier in the Aragon weekend, Rossi – who was eighth in the race – labelled the M1’s acceleration “less embarrassing” than one year ago.

But Vinales urged Yamaha to now find more power relative to Ducati and Honda, as he believes they are gaining three tenths in laptime for “free” on straights in comparison.

“For sure we need to improve, because Honda and Ducati, they are a step ahead,” he added.

“So, it’s always three tenths free [they are gaining on power] doing the same, and that’s important over 23 laps.”