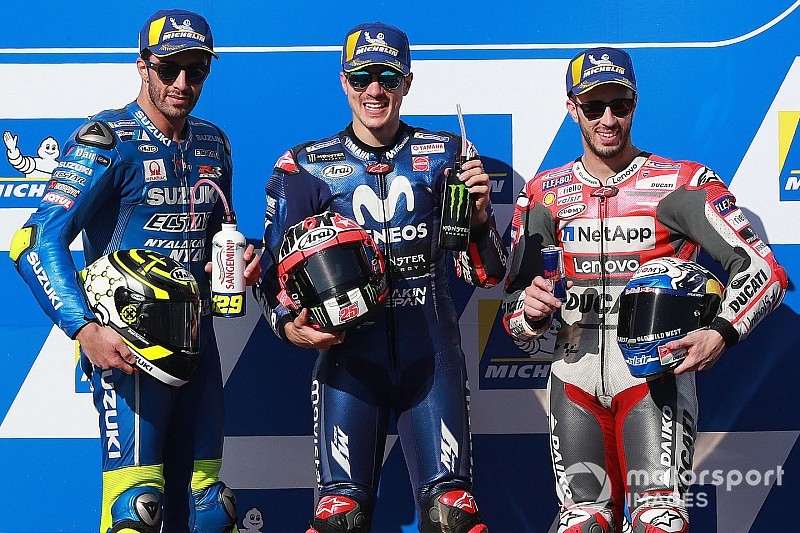 Maverick Vinales broke a 25-race winless MotoGP streak for Yamaha with a dominant performance at Phillip Island, as Johann Zarco walked away from a nasty crash with Marc Marquez.

Vinales broke away the pack quickly after taking the lead on Lap 6, streaking to a comfortable 1.5-second win.

It was both Yamaha and Vinales' first triumph of the season, the team having been winless since Assen last year and the Spaniard since the Le Mans race the same year.

The race also saw another massive shunt at Turn 1, Zarco slamming into the back of Marquez in the short braking zone.

The Tech 3 rider was lucky to walk away from a wild ride through the gravel, while the World Champion retired with damage to the back of his Honda.

Both Pramac Ducatis had a go at leading the race on Lap 1, Danilo Petrucci charging from the third row into the lead by the first corner, before sailing wide at Southern Loop and dropping to the back of the field.

That opened the door for hometown hero Jack Miller to sweep into the lead, heading the field from Turn 4 until the start of the second lap.

At that point Marquez breezed into the lead, Andrea Dovizioso and Andrea Iannone following the champion through.

Running softs front and rear, Zarco quickly bought into the battle at the top five as well. As Dovizioso moved into the lead at the start of the fifth lap, the Frenchman found himself scrapping with Marquez as part of the slip-streaming lead pack.

That led to a frightening shunt at the fast first turn, Zarco and Marquez rubbing wheels as they approached the left-hander. The contact sent Zarco flying dramatically through the gravel, while Marquez managed to hold on to his wounded bike.

Somehow Zarco managed to get straight back on his feet after coming to a stop, while Marquez cruised back to the pits, both their races done and dusted.

It was at that point that the Yamahas took control, Vinales and Valentino Rossi filtering into a reasonably comfortable one-two. With a soft on the front, Vinales quickly pulled over a second clear of his teammate as he made a break for clean air.

While Vinales maintained his lead, Rossi fell into the pack behind. He, Iannone, Alvaro Bautista, and Dovizioso traded spots behind the leading Yamaha, before Iannone momentarily took himself out of the battle by running wide at Turn 4 with 15 laps to go and dropping to fifth.

By Lap 16 Vinales was gone, leaving Rossi to scrap with the factory Ducatis over second. Iannone, meanwhile, used the squabbling pack to make up the ground lost with his Turn 4 mistake, buying back into the battle with 11 laps to go.

All the while Vinales streaked away to a lead of over four seconds, and from that point it was race management for the Yamaha rider, who let Iannone and Dovizioso close back to with two seconds but never seriously looked like surrendering his lead.

It was the two Andreas that ultimately pulled clear of what had been a six-way fight for second, initially inspired by Iannone make a brief run at Vinales with four laps to go.

As his burst of pace wore off Dovizioso almost overhauled the Suzuki rider for second on the final lap, Iannone just able to do enough to hold on to the spot.

Bautista finished up fourth in his role as Ducati supersub, followed by Alex Rins, while Rossi and Miller dropped back to sixth and seventh respectively.

Dani Pedrosa capped off a miserable day for the Repsol Honda crew by crashing out right on the midway point of the race at Turn 4.

Australian MotoGP - the race as it happened

Miller was set to replace Lorenzo before Japan crash