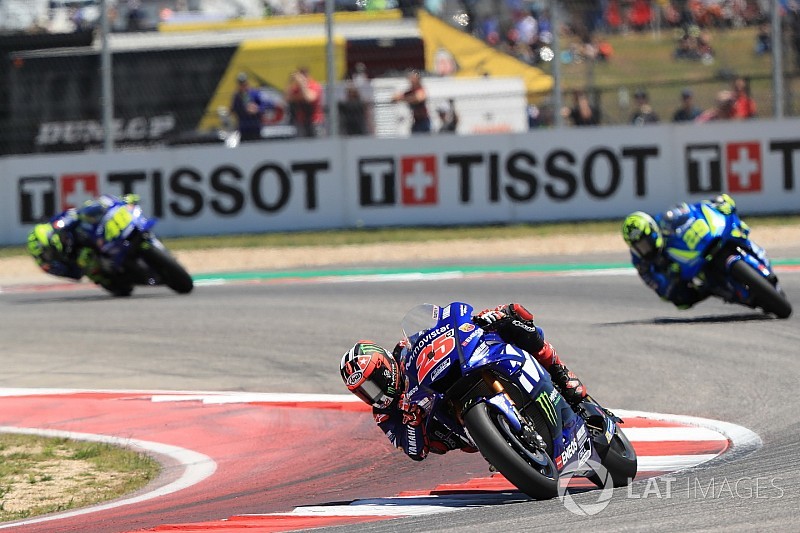 Renowned COTA master Marc Marquez beat Vinales to victory by 3.5 seconds, but the Yamaha rider was clearly best of the rest, finishing ahead of third-place man Andrea Iannone by a similar margin.

Vinales expressed optimism for the next round at the recently-resurfaced Jerez track given the recent upturn in Yamaha's fortunes.

"We know we improve quite a good thing from Argentina, and we have a way to go to improve even more," said Vinales, whose last MotoGP victory was at Le Mans in 2016 May.

"Everything is changing, our way of approaching the weekend also. I can smell the victory.

"Now we have to improve another little step in Jerez. It seems the grip is good there and when it's like that, our bike flies.

"I think it's a track that fits quite well for our bike and we're going to try our best."

Vinales said Yamaha has made a major step with its electronics - an area Rossi previously highlighted as a weakness - having requested a more "wild" M1 after his run to fifth place in Argentina.

"We did a big improvement on the electronics," Vinales said. "We start to understand how to go fast on the 2018 Yamaha bike. The way we work is a little different, being more aggressive and risking a little more.

"The team has recovered well since the first race, we have improved the weak points of the bike that we had in Qatar and Argentina and that is very important."

Vinales added that taking second at Austin was a "great relief for the team" after a slow start to the year.

"We knew that Austin was a difficult circuit for our bike, and we saved it," he said. "We had a good race and we have to be happy, we were not far from Marquez."