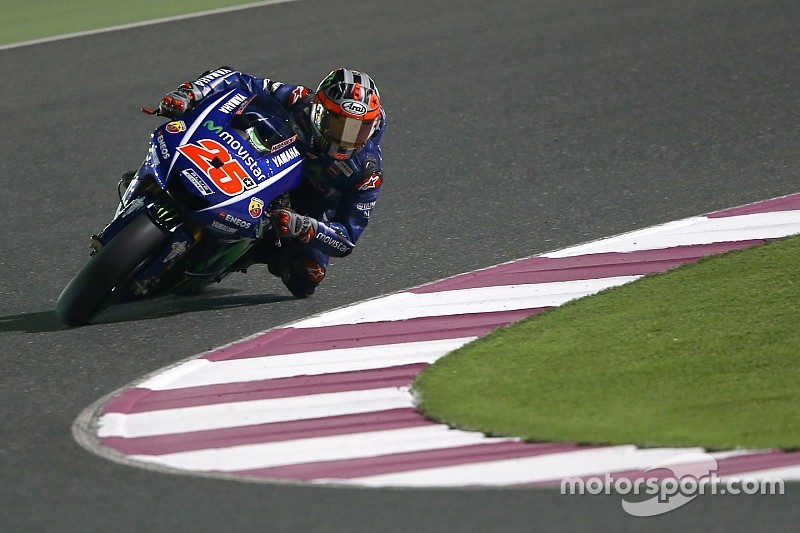 After topping the times on Saturday, Vinales – who also ended up quickest in the first two tests of 2017 in Sepang and Phillip Island – logged Sunday’s fastest time, a 1m54.330s with around two hours and 20 minutes remaining of the session.

That knocked off early pacesetter Jorge Lorenzo off the top of the times, the Ducati rider having set a best of 1m54.519s just a few minutes before.

Lorenzo, who later trialled Ducati’s new aerodynamic fairing first seen on Saturday on Andrea Dovizioso’s bike, was soon demoted to third by the Italian rider, who using the standard bodywork beat his teammate by 0.121s to go second.

Honda’s Dani Pedrosa later managed to slot himself into third in the final half-hour with a 1m54.469s, pushing Lorenzo down to fourth place.

Alvaro Bautista recovered from an early crash to complete the top five on the Aspar Ducati, 0.384s off the pace, followed by fellow Ducati satellite rider Scott Redding, who was sixth fastest for the Pramac squad with a late improvement.

Sampling a new type of fairing on the RC213V – different to the one seen on Friday – Marquez crashed at Turn 7, his second fall of the night, before suffering a third crash with a little over an hour remaining after reverting to the old fairing.

Valentino Rossi also had an underwhelming time on the second factory Yamaha after having been second-fastest on Saturday, finishing 11th and 0.855s slower than teammate Vinales.

Andrea Iannone was best of the Suzuki riders in 12th, also suffering a heavy crash that destroyed his GSX-RR bike, while Aleix Espargaro headed the Aprilia contingent in 15th.

KTM riders once again propped up the timesheets, with Bradley Smith the Austrian marque’s best representative in 21st, 2.021s off the pace.

Rossi "worried" about lack of pace ahead of Qatar opener

Why Vettel is key to turning Aston into a success story

Why Vettel is key to turning Aston into a success story