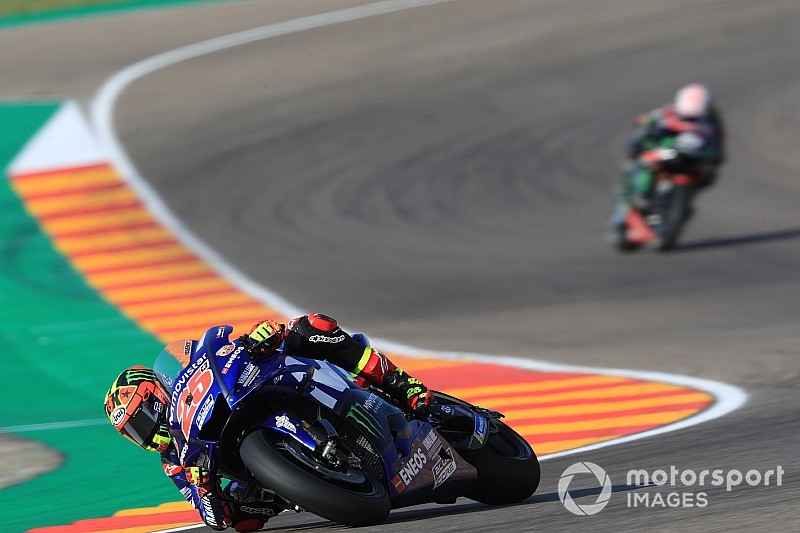 Maverick Vinales and Franco Morbidelli have been hit with grid penalties for MotoGP's Aragon Grand Prix after holding up Bradley Smith in the first part of qualifying.

Vinales and Morbidelli were riding at low speed during the latter stages of Q1, and compromised a fast lap of Smith.

The KTM rider, who had enjoyed a strong weekend so far, was just one tenth slower than Vinales' benchmark time after three of the four sectors when he caught up with the crawling trio of Vinales, Morbidelli and Xavier Simeon at Turn 16.

The Briton had to go around the outside of the latter two but then had to move to the inside line to also pass Vinales, and Smith's laptime was eventually four tenths off the Q2 cut-off.

After qualifying, Smith called the situation dangerous and he felt Morbidelli, who was given a six-place grid penalty, was the worst offender.

"A little bit disappointed, a lot of experienced motorcycle racers sat in the braking area, and just the closing speed is so dangerous," he said. "I'm doing 330 [km/h] and they're doing no more than 150, and I don't know which way they're going to go.

"It looked quite calm on the TV but you imagine, arriving at that speed is certainly not calm.

"Had to go on the kerb to avoid Morbidelli and then try and dive in on the inside of Maverick there. Disappointing because I definitely felt a 1m47s [laptime] was there.

"I caught Maverick unawares, Maverick tried to open, but if you're doing 150 and you open, you can't accelerate to 300, it just doesn't happen.

"And Franco just didn't look behind, so Franco was just downright dangerous.

"Simeon found himself in the same situation I think, he's a little bit more to the inside, but you know basically you have three guys in the braking area and you just can't do that.

"It would've been very close between me and [Takaaki] Nakagami, who made it through in the end. But, not to be."

The penalties mean Vinales will start the Aragon race 14th while Morbidelli will line up 19th on the grid.