Yamaha MotoGP rider Maverick Vinales says he fears his two strong results at Assen and the Sachsenring were merely "lucky" after struggling to a lowly 10th-place finish in Sunday's Czech Grand Prix.

Off the back of a victory in the Dutch TT and a strong second place in Germany prior to MotoGP's summer break, Vinales registered his worst finish since April's Austin race at Brno.

The Spaniard qualified ninth on a drying track on Saturday, plummeted to 15th with a customary poor start and then struggled to make up positions thereafter.

Vinales said the strong feeling he felt in warm-up, in which he was second only to Ducati rider Andrea Dovizioso, disappeared after the shower that hit Brno just before the start of the race.

"For me it’s not disappointing," said Vinales when asked how he felt. "This is the way the Yamaha works. If there is no grip, the bike doesn’t work.

"Maybe [at] Assen and Sachsenring we’ve been lucky the grip was not so bad. When it rains and then goes dry, our bike is difficult, loses everything.

Vinales said that getting stuck behind Johann Zarco's KTM and Francesco Bagnaia's Pramac Ducati was his main issue in the race, rather than his bad start.

"I took seven laps to overtake Bagnaia," said Vinales. "He was 1.5s slower than me and I couldn’t pass him. Very frustrated. Same as always, same story.

"On the start it’s true I slide a little bit and then I get stuck with Cal [Crutchlow], and I could not be more in the front and not prepare the first corner, so I lose many places.

"Then it takes five laps to overtake Johann, [to pass] Pecco nearly all the race. It was impossible."

Sixth place "quite positive" for Rossi

He agreed with Vinales' assessment that the M1 suffered because of the pre-race shower, although he said he felt better in the race than he had done in warm-up.

"Our bike is very sensitive to the change of conditions," said Rossi. "Usually, if we have a weekend where everything is dry, we have rubber on the asphalt, we are faster.

"If there is rain, or a change in temperature, we suffer more. So I agree [with Vinales], yes.

"After the rain of [Saturday], I felt very bad in warm-up. For some reason, I don’t know why, in the race it was better."

He added: "For sure we are not happy about sixth place, but [it's] better than the last races. I could ride my bike in a better way, in the end it was not too bad.

"The guys that arrive in front are faster than me, but in the end it was better than the last races, so quite positive." 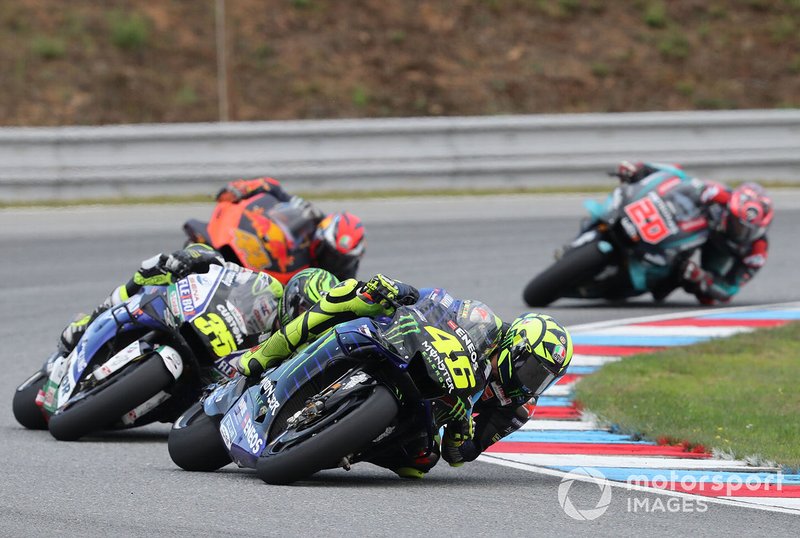