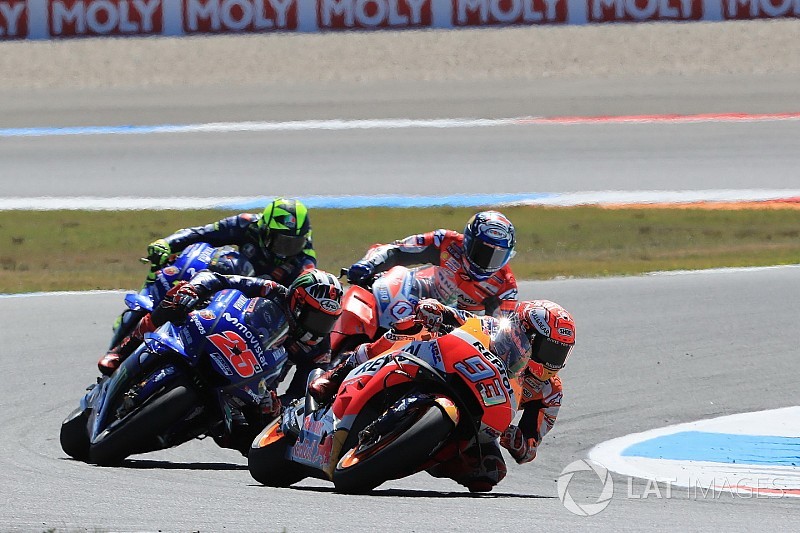 MotoGP points leader Marc Marquez said his moment with Maverick Vinales, when they both ran wide and were close to touching the gravel, was the scariest in a "wild" Dutch TT.

Marquez and Vinales were part of a thrilling multi-bike fight for the win throughout the entire Dutch TT.

The Honda rider, who ended up winning, had two big moments during the race, first when he was overtaken by Alex Rins at Turn 5 and only just avoided falling off his bike.

The second time occurred when he was leading and was attacked by Vinales, who went side-by-side with him into Turn 9, both riders running wide after some contact.

While they rejoined after only losing two positions, Marquez said the incident was "scary" as he expected to run onto the gravel.

"Maybe the one that I remember most is with Vinales because was quite scary," Marquez told BT Sport.

"I miss the Turn 8, when we were in parallel and when he brake we have contact.

"My front lever, just with the contact, I release the brake because just was slippery, the handlebar.

"Then I say 'okay, I go to the gravel'. But I don't know why, I put first gear and I was able to stop the bike.

"That was maybe the moment that I was most scared."

Vinales, who ended up finishing third, also added that he expected to run on the gravel.

"That was funny, I was thinking I went out, I was pretty scared because I thought I go out on the gravel."

Marquez said that while he expected a big group of riders fighting at the top, he anticipated a "calmer" race.

The championship leader's initial plan was not to push in the early stages, but he soon recognized that he'll lose out if he doesn't join the fight.

"Today all the group was wild, and we were fighting against everybody.

"I have the rubber [marks] from I don't know who, sure somebody has my rubber, too. We were in the limit but inside the limit, so was so great.

"I didn't expect the race like this. I expect a race, big group, but calmer but everybody was attacking.

"Then I was okay, I will be quiet, but I immediately check that if I didn't attack, everybody would have overtaken me.

"So then I say get up, and try to push, try to manage and in the end I give everything."