Vinales says Assen crash the "strangest of my life" 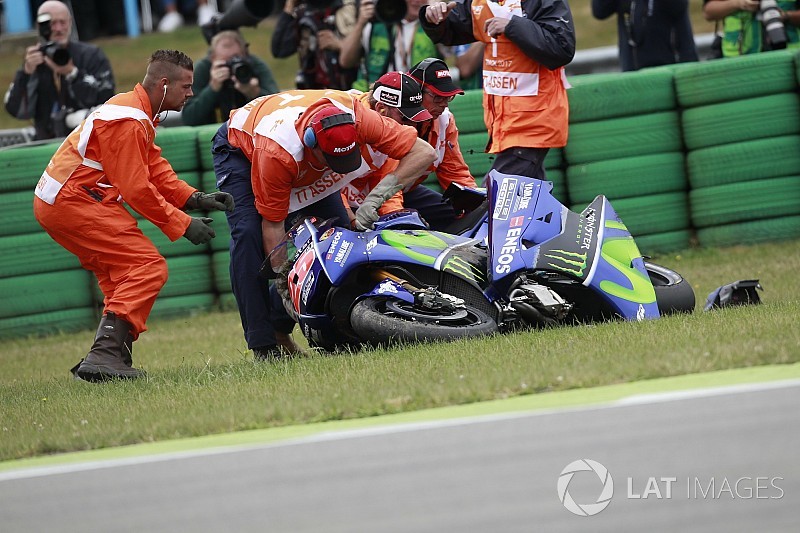 Maverick Vinales has described the crash that cost him the lead of the MotoGP championship in the Dutch TT at Assen as the “strangest” of his life.

The Yamaha rider suffered his worst qualifying session of the year so far in wet conditions as he could do no better than 11th, but surged up the order in the opening part of the race and was lying sixth after 10 laps.

He had just moved clear of Scott Redding’s Pramac Ducati for fifth place when he suffered a high-side crash at the final chicane on lap 11 – marking his second non-finish of the 2017 campaign and of his Yamaha.

It meant Andrea Dovizioso, who finished fifth, took the lead in the standings by four points, with race winner Valentino Rossi moving up to third, only three behind his Yamaha teammate.

"It was the strangest fall of my life,” said Vinales. “The bike made a strange movement that I had not experienced all weekend.

"There are days when it's time to learn, and what we have to learn today is that I cannot afford to be 11th on the grid. That forces you to treat the race like a sprint with no time to think.

"Once I was able to overtake [Andrea] Iannone and [Alvaro] Bautista, riders who braked very late, I knew I would get ahead. Seeing how I was on Friday, I was hoping to win. I had the pace do it."

Vinales was right ahead of Dovizioso at the time of his crash, and admitted he was fortunate not to be hit by the Italian rider in the incident.

“I’m very lucky,” Vinales admitted. “I have to say thanks to Dovi because he didn’t [hit] me. For sure it could’ve been much worse.

“I’m still four points from the championship leader, I’ve been like this this season but I’ve recovered pretty well from one race to another.”

Vinales had set the pace in dry conditions on Friday, and was tipped by Honda’s Marc Marquez to feature at the front despite his lowly grid slot.

Rossi likewise said he was “worried” his teammate would make a quick recovery early in the race, but said it didn’t affect his mentality once he had been given word of Vinales’ exit.

“Following the pace that Maverick had on Friday, I was worried that he [would] arrive [at the front],” said Rossi.

“At the beginning I tried to push from the first lap, but anyway, we had quite good pace in the conditions. So when I saw Vinales [was] out, it was important news for the rest of the race.

“But at that moment you don’t have time to be happy or not happy, [you] just think to go fast as much as possible.”