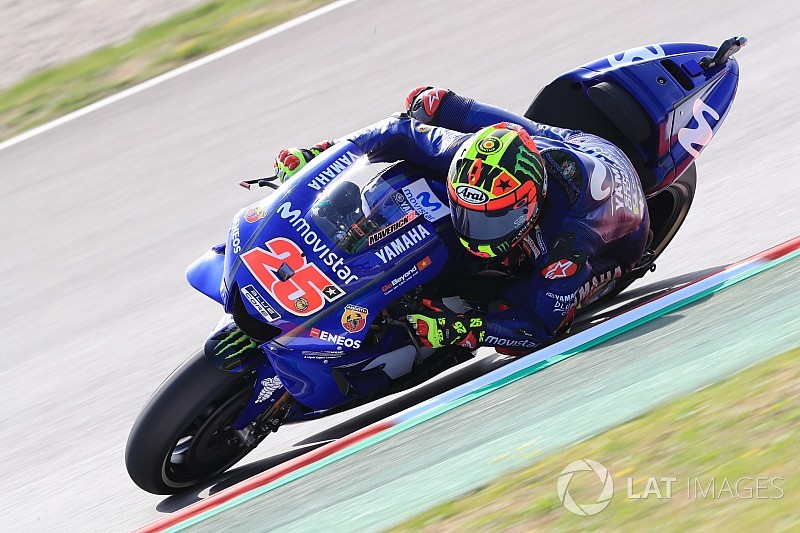 Maverick Vinales said his Catalan Grand Prix was "in the trash" after one lap, as the Yamaha MotoGP rider's start woes continued in Barcelona.

Despite Vinales vowing to try a new formation lap procedure for the Catalan GP to put more temperature into his tyres, the Spaniard again had a poor start and struggled initially.

He lost six positions at the start to run 10th, and eventually finished sixth, recovering ground late on.

Vinales said his poor start meant his race was ruined after one lap.

"Amazing, amazing. I don't know what to do anymore," complained Vinales. "I copy the same start that I did during the practices but the others start much faster and then I get into the wheelie and everyone overtake me from everywhere.

"Honestly, first lap of the race is to put it on the trash and is like this because then I am riding as fast as the top guys.

"Nice battle with Johann [Zarco], but I don't think is the place to be. We have to be in front, at least close to Valentino [Rossi] so there is a lot of work to do for sure.

Vinales urged Yamaha to "give me the possibility to start well", as he was able to do so while he was with Suzuki in 2016.

"Seems to be [I am] the only Yamaha that have problems, I really don't understand.

"Anyway, 2016 I did great starts always with the other manufacturer [Suzuki] so they [Yamaha] need to give me the possibility to start well and then for sure [it's] going to be another race."

When asked if his different formation lap procedure helped him, Vinales confirmed that he was better at braking in the opening laps, but said it was still "impossible" for him to ride the bike with a full tank.

"For sure [the new procedure] helped,  I was in much better conditions on the beginning, at least on the braking area I could brake much better.

"But still with full tank for me it is impossible to ride the bike, I just go very wide everywhere and slide a lot in the tyres.

"In the first lap was no turning on the bike, I just go behind Cal [Crutchlow] and was amazing how bad we were going.

"Anyway after some laps, after few laps was better and finally I could get sixth - but not the result I expect."