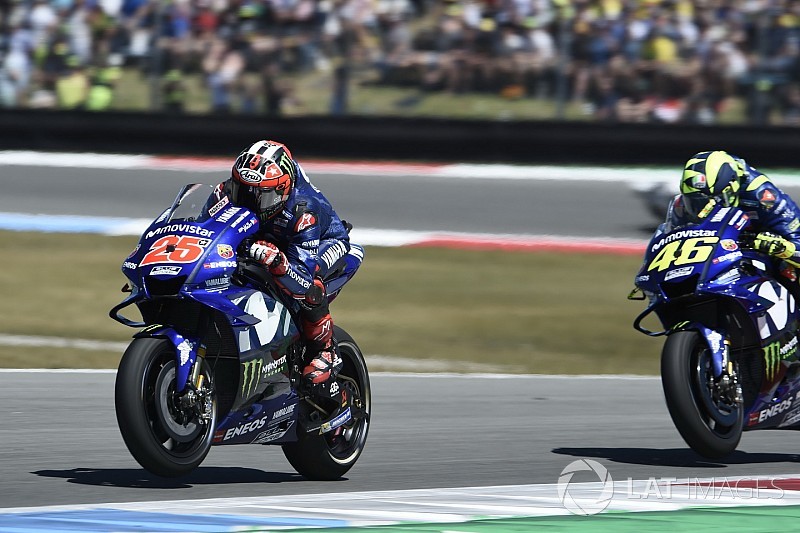 Maverick Vinales hopes he can still challenge Marc Marquez for the 2018 MotoGP title if Yamaha brings a "big" update after the summer break.

Vinales scored only his second podium of the season at Assen, narrowly missing out on second place to Alex Rins, and now lies 47 points adrift of Marquez at the head of the standings.

It marked Vinales' best showing in several races, helped by a stronger performance in the early laps of the Dutch TT having fallen into the midfield in the opening stages of the previous Barcelona race.

The Yamaha rider reckons it is still possible to fight for the title if the Japanese manufacturer can make a step with its electronics package and improve the acceleration of the M1.

"I'm hoping [in] the summer break Yamaha can bring something big and we can have the chance to fight for the title," he said.

"I am happy, we recover a lot of confidence in the weekend, especially work really well for the race.

"For sure I felt good with full tank, even better than the last laps of the race because was difficult, we prepare the bike for the first laps.

"I hope the problems are fixed, still on the electronics we need to improve a lot because compared the opponents I think we are far.

"But anyway we are on a good way. I think the way we work this weekend was the correct one, working a lot for the race, not for one lap.

"I think our bike is on a good level, on chassis I think we are really good in the fast corners I felt great."

Vinales' teammate Valentino Rossi took a more pessimistic view for the second half of the season, adding that with Marquez being the fastest rider, it will be difficult to challenge for the title.

"Like I said also during the practice, Marquez was the strongest and [in Assen] he fight but he had a margin to go alone," said Rossi, who trails Marquez by 41 points.

"And at the end he decided to go and he arrived two seconds [ahead]. It’s difficult because he’s faster than us, but he’s also faster than everybody else. So I think the championship will be very hard.

"But we have a great fight for the second place, with another two or three riders minimum. We have to try and we have to hope we improve the bike for the end of the season. But it’s not very easy."