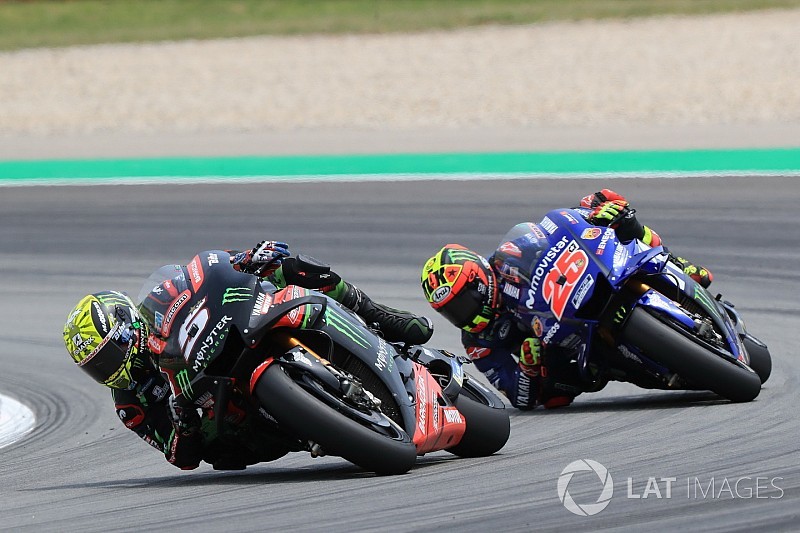 Yamaha rider Maverick Vinales tried to emulate Tech 3 privateer Johann Zarco's seating position in the Barcelona MotoGP test – but said it only made the 2018 Yamaha more difficult to ride.

Zarco has used a 2016-specification M1 to great effect since his debut in the premier class last year, and has put the two factory Yamahas in the shade during many a race weekend in that timespan.

Vinales himself said that Zarco's form was “proof” Yamaha had gone in the wrong direction, although the Frenchman has suffered a dip in form since crashing out of victory contention at Le Mans.

Having battled Zarco for an eventual sixth-place finish in Barcelona, Vinales tried to copy the Tech 3 rider's style during the test, but was left unimpressed with the outcome.

“[I tried] just to sit a little bit more back, because when I was riding with Johann, the riding style is a little bit different, I tried to be a little bit like his style,” Vinales said after the test.

“But finally [it] upset a lot the bike, it's two different bikes. In the end the bike moved a lot and it's hard to ride. So I have to continue with my style, which helps me be quick.”

Vinales' Barcelona challenge was hindered by a terrible getaway and a lack of pace in the opening laps, something that he'd tried to combat by being more aggressive on tyre warm-up before the start.

The Spaniard was thus focused on addressing his early-race struggles in the test, “always” practicing with a full tank of fuel.

He logged 85 laps en route to the ninth-quickest time, recording a final run with nine consecutive laps in the range between the 1m39.797s and 1m40.144s – which he believes would've been “the pace to win”.

“Happy because we did different set-ups, and finally the front tyre works a little bit better, and I could push,” Vinales said.

“In the end when I set up the bike more to my liking I could do 10 laps in the 39s with a full tank.

“That was the race pace, the pace to win. The track was pretty hot and slippery but the times were there.”

Vinales said he couldn't get “the tyre to stick to the track” in the race, but in the test “I managed to get it to brake fine”.

Asked whether he has requested anything from Yamaha, he said: “Above all, to have a bike to my liking.

“As I said this year, I have maybe followed the opposite direction to what I wanted sometimes. So we'll try to set up the bike to my liking, especially for those first laps.”

Villeneuve hits back at Button