Vinales relieved of "a lot of pressure" after Assen win 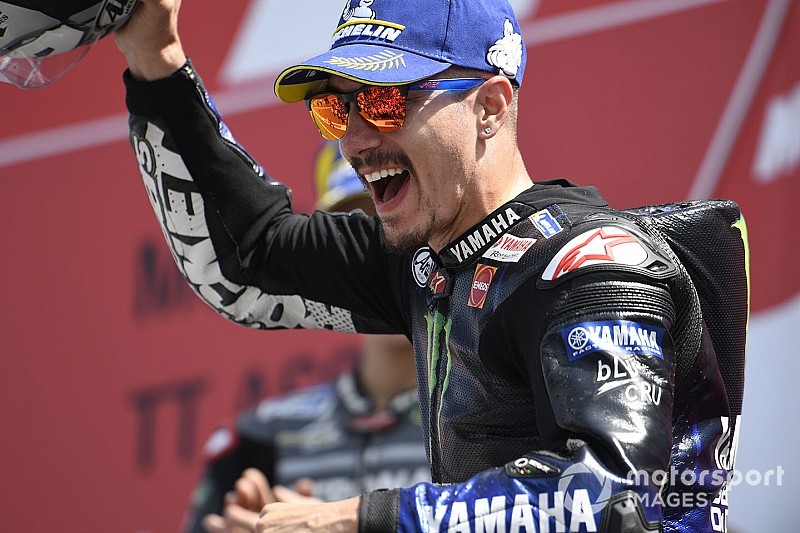 Maverick Vinales admitted that "a lot of pressure went out" after he crossed the finish line first in MotoGP's Dutch TT and scored Yamaha's first win of 2019.

Vinales emerged victorious in a three-way fight with Marc Marquez and Fabio Quartararo, breaking the reigning champion's resolve in the final laps to win by nearly five seconds.

The factory Yamaha rider's win came after a difficult start to the 2019 campaign as he has been taken out by other riders in three of the races, most recently by Jorge Lorenzo in Barcelona.

"I've been knocked out in two races, and then the jump start in Austin which was the race I felt most prepared. Also in Montmelo I think we had the opportunity for the win.

"I was very happy when I crossed the line, a lot of pressure went out. Bringing Yamaha to the top from me is something unbelievable because in two years we are the only ones [among Yamaha riders] at the moment to make the victory, but I have to say congratulations to the team."

Vinales added that he did not expect to have such strong pace as he was anticipating being less competitive in the race, which has been a trend for the Spanish rider the past couple of years.

"Difficult to believe, because I thought I could not make this pace because in the warm-up I was not bad with used tyres, but we know always from the warm-up to the race we miss a little tenths. But finally was hitting the [1m]33[s] all the time, and I was very happy.

"This weekend was a good qualifying so I knew if I was in the front row I had the opportunity to win the race.

"I expect a little bit more [riders in the lead] group but somehow the race finally we were only three.

"I play my cards on the best way, I knew I had the hard tyre on the rear so [was saving] my potential [for] all the last 10 laps, I was pushing [at] the correct moment. I try to do it on a good way.

"The best feeling is that finally the job [has] been done from Friday to Sunday and that is the most important."

Quartararo was "waking up from pain" the night before Dutch TT

Petrucci: Not attacking Dovizioso cost me a position