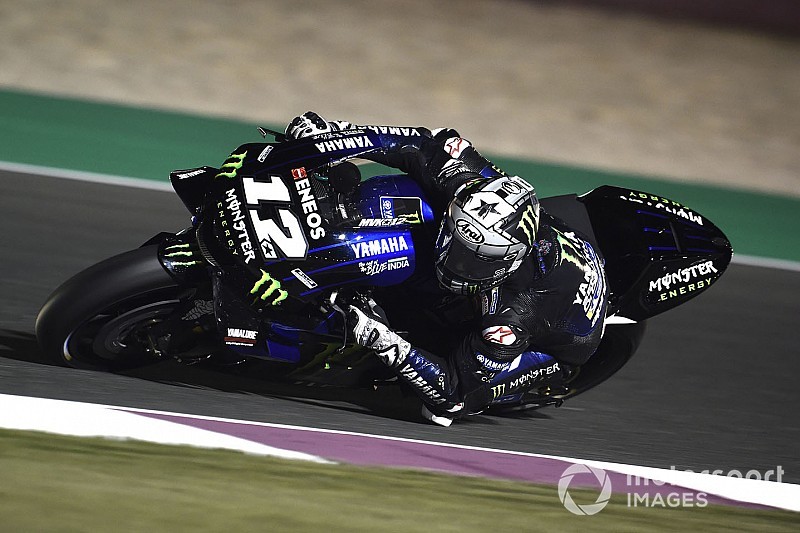 Maverick Vinales concluded 2019 MotoGP pre-season testing by setting the fastest time of the week in Qatar, leading a Yamaha 1-2 ahead of satellite rider Fabio Quartararo.

Vinales, who topped Saturday's opening day of Qatar running and ended up second on Sunday, move to the head of the times on Monday with a little over two hours remaining of the six-hour session.

Honda rider Marquez was one of several crashers on Monday, falling at Turn 6 in the penultimate hour.

His new factory teammate Jorge Lorenzo also had a late spill at Turn 2, but ended the day only 0.040s behind Marquez in fifth place, a major improvement on his form in the opening two days of the test.

Franco Morbidelli ensured all four Yamaha riders finished inside the top six, ahead of lead KTM rider Pol Espargaro and Takaaki Nakagami on the best of the LCR Hondas.

Andrea Dovizioso concluded the test down in 15th place, some four tenths slower than teammate Petrucci and 1.025s off the pace.

After Rins topped Sunday's times, both Suzuki riders ended up outside the top 10 on Monday, with Rins and Joan Mir occupying 11th and 12th places.

Aprilia's efforts were led by new recruit Andrea Iannone in 16th, one place ahead of Cal Crutchlow (LCR).

Johann Zarco's struggles on the KTM continued as he languished down in 22nd place, nearly two seconds off the pace and ahead of only Tech 3's Hafizh Syahrin.

Zarco was another rider to crash on a cool and windy day in Qatar, along with Rins, both LCR riders, Aprilia wildcard Bradley Smith, Miguel Oliveira (Tech 3 KTM), Francesco Bagnaia (Pramac) and Tito Rabat (Avintia Ducati).

With pre-season testing now complete, the next on-track action will be the opening practice sessions of the 2019 campaign proper in Qatar on March 8, ahead of the season-opening race on March 10.

Marquez now ready to fight for podium in Qatar opener