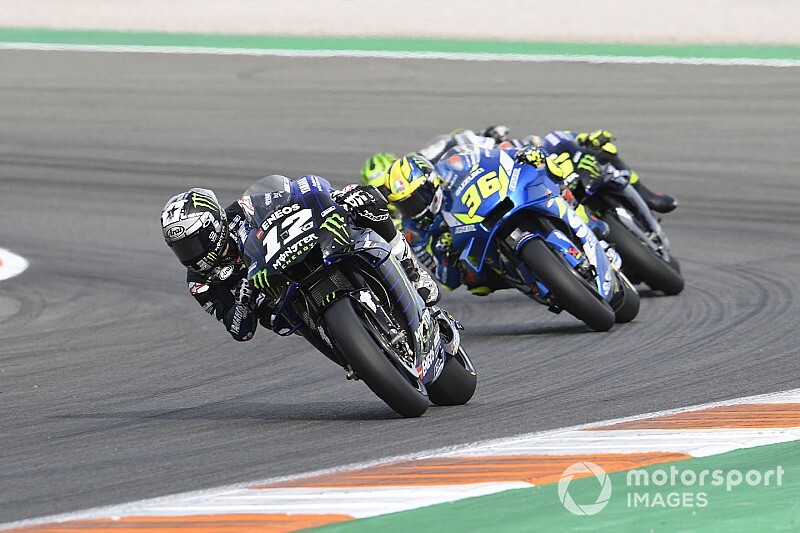 Maverick Vinales says a lack of grip from the off meant he “never got a chance to be fast” in the MotoGP Valencia Grand Prix finale on Sunday.

The Yamaha rider had the strongest race pace throughout practice and was expected to challenge eventual winner Marc Marquez for victory for the third race in succession in Sunday’s 27-lap encounter.

Instead, he ran in sixth for the entire race and was 8.8 seconds behind Marquez at the chequered flag.

However, this was still enough to secure third in the standings ahead of Suzuki’s Alex Rins, who was fifth in the race.

“I didn’t have the feeling on the bike,” Vinales admitted. “We suffered a lot on the rear tyre, and I never created as much grip as in practice.

“So, I could not be fast during the race, never got the chance to be fast. So, I tried to control the race the best [I could] and be behind Rins, which was the main target.

“[Third in the standings] for sure means a lot because it equals our best here in Yamaha, and then to be inside the top three [in the championship] is always important.

“So, to achieve a top three with five [DNFs], not many good races, is great. So, for me, it was a present.”

Battling with Yamaha’s typical issue of a lack of traction and poor tyre conservation, Rossi believes the colder temperatures made these problems “normal”, but was still confused as he was faster in the cooler morning warm-up on Sunday.

“The conditions were very, very much on the limit to have a motorcycle race because it was worse than Saturday,” Rossi replied when asked if the track conditions caused his problems.

“The other question mark for us is that in FP4 I did 20 laps in a row with the same bike and same tyres [as I had in the race], but I was a lot faster and I felt [I had] – not the pace to win the race – but comfortable on 1m31s.

“So, I was in a lot more trouble, but the conditions and the temperature were less. So, this is quite normal.

“What we don’t understand is that this morning we used the same rear tyre and this morning it was five degrees less than the race, but in the morning I was faster.”