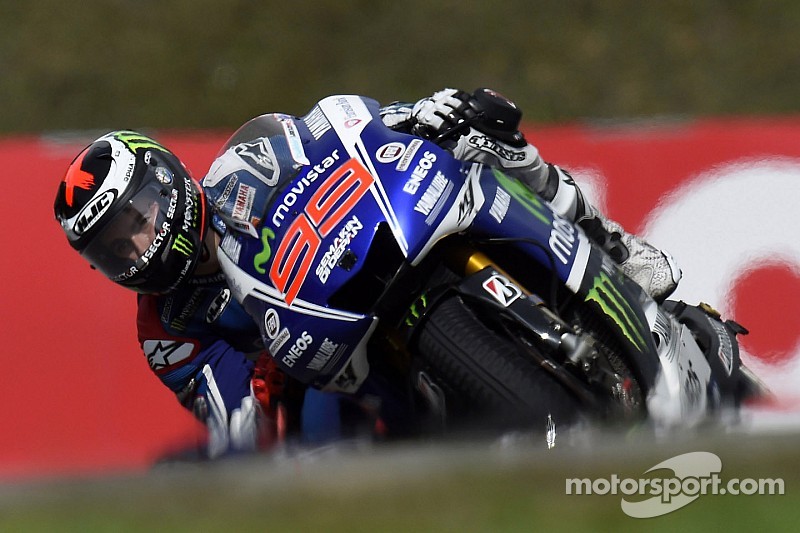 Movistar Yamaha MotoGP riders Jorge Lorenzo and Valentino Rossi made a strong start to this weekends Grand Prix České Republiky in this mornings first practice session, but were frustrated by wet weather in the afternoon.

After a successful weekend in Indianapolis, Lorenzo kept the momentum going today in Brno. The Spaniard was enjoying the flowing Czech circuit and was quick to top the timesheets, rival Marc Marquez taking over just half way through the session. Lorenzo finished Free Practice #1 with a best time of 156.840, only 0.037 off the lead, moving him to second place.

Teammate Rossi displayed a good race pace during his long stints in the morning. The Italian consistently lapped in the 157s and topped the leaderboard multiple times. His fastest lap was a 1'57.532, securing him fifth place.

The teammates were both eager to improve on their times during Free Practice #2, but only three minutes into the session it started to rain, putting the action on hold. With 19 minutes left on the clock all the riders went back out in the pouring rain to work on a set-up for wet conditions.

Towards the end of the session Lorenzo and Rossi started to quicken their paces but they were unable to improve on their times from this morning.

Jorge Lorenzo (2nd / 1'56.840 / 14 laps)
While riding in the dry conditions this morning I was quite surprised by our performance. It was good from the beginning but I felt that we had a lot of things to adjust, so the margin for improvement was high. Unfortunately it rained in the afternoon. In those conditions we are still quite far from the fastest. We need to work on our set-up for the wet, because it seems like its going to rain tomorrow, but not on Sunday. We want to be fast tomorrow if it rains; in case of dry conditions I think we are quite good.

Valentino Rossi (5th / 1'57.065 / 12 laps)
This morning we rode the bike with the dry tyres and dry setting. Unfortunately we had some rain this afternoon. Its a shame because we have to try something to improve the setting, but at the same time I did get to do some laps in the wet. I tried the bike with the wet tyres and the first impression was not so bad, but we have to work to improve. We have to prepare the bike as soon as possible because we lost one practice session and need to have a clear idea of what we will do in case of a wet situation. We have to work with the team and be ready for tomorrow. In the wet conditions we lose a little bit in acceleration. The problem is that, though Im in the third position, my rivals are one second faster. It looks like they are very strong.

Massimo Meregalli - Movistar Yamaha MotoGP Team Director
We started really well this morning; it seems that our base set up is already a good level for the Brno circuit. We still have some areas where we can make several steps so it was frustrating to have the rain come down this afternoon, stopping us from continuing our work from the first practice. It looks like it's going to be dry for the race but maybe wet for qualifying so we are working to try and make sure we are prepared for all eventualities.

Rookie Pol Espargaro opened his inaugural MotoGP account in the Czech Republic with a positive finish on the opening day of practice at Brno for the eleventh round of the 2014 World Championship. He kicked off his free practice campaign by initially leading the bright and sunny FP1 session, before eventually finishing in 9th position with a time of 157.634 that was only eight tenths of a second from the top position. Around midday the clouds rolled over the undulating Czech circuit which is hosting its 27th MotoGP event this weekend and the rain proceeded to fall as soon as the afternoon practice session began.

Yet Espargaro powered through the tricky conditions before finishing with a best time of 209.412 in 8th position and additionally clinched the overall top speed of the session with 306.9 km/h. The reigning Moto2 World Champion will aim for a strong result in qualifying tomorrow in view to Sundays race as he plans to further build on his current, impressive placement of sixth in the World championship.

On the other side of the garage, Bradley Smith ended the opening day of practice in tenth position in the combined standings after the rain in the afternoon prevented him of beating his morning practice time. The young British rider who has extended his contract for an additional year with the Monster Yamaha Tech3 squad after the announcement earlier this week, began the opening day of practice with a best lap of 157.816 having experimented with various aspects of his Yamaha YZR-M1 as he sought to establish a solid setup.

In the afternoon session, the 23-year-old rider braved the slippery track surface at the 5403 metre circuit to finish in ninth with a best time of 209.722. His pace in the tricky conditions was highly impressive, clocking the quickest sector times out of all the Yamaha MotoGP bikes in the first half of the circuit whilst his perseverance saw him riding the most, with 15 laps undertaken. Tomorrow he will look to qualify on the front two rows following his hard fought sixth place finish in Indianapolis.

Pol Espargaro (9th / 1'57.634 / 15 laps)
It has been quite an eventful first day here in Brno and we collected a lot of useful information for the weekend. This afternoon has been the first time that we could test the bike in full wet conditions and the truth is that I'm really happy about how the session went. The grip with the rain tyres is amazing and I nearly touched the curb with my elbow even though it was wet! I have to thank Bradley because I did many laps behind him and I learnt a lot about the line and how smooth I have to ride with the wet surface by following him.

I rode some competitive lap times and the rhythm was consistent as well, so of course there is room to improve but we have started in a positive fashion. During this morning's session, I was probably riding a bit too aggressively and in a way that the Yamaha should not be ridden around this track so I think we can certainly be much faster.

Moreover we have struggled in a few areas, for example at the exit of the corner where the bike is sliding quite a lot and overall I'm lacking a bit of grip at the moment, but for sure we can resolve this issue for tomorrow. During FP2 we actually planned to try the harder tyre compound which I felt very confident with in Indianapolis but the session turned out to be a wet one, so we will have to wait until tomorrow.

Bradley Smith (10th / 1'57.816 /15 laps)
All in all it was a good day for me today, even though the conditions were mixed. Overall, Id say that we have been lucky with the weather so far this year, but we must always expect the rain to come at some point as it did today. In the morning I tried both bikes and we now have a very clear direction of which way we want to go in terms of a dry setup.

I was clearly able to undertake a much quicker pace in the final run this morning, so we will continue with this setup. In the afternoon session I was instantly comfortable on the wet surface and my lap times were comparable to the other riders who stayed out for nearly 30 minutes.

The track eventually started to dry and I didnt push right on the limit straight away as the aim was just to obtain some more valuable data. This is especially useful as it looks like there will be more mixed conditions tomorrow, but overall I am pleased with what we achieved today.

NGM Forward Racing rider Aleix Espargaro set todays fourth fastest time at the GP of Czech Republic with his best lap time of 157.002, less than two tenths from the provisional pole. It was a positive start also for new teammate Alex De Angelis, who made his debut on a Forward Yamaha this morning with a very positive feeling.

The second free practice session was spoiled by the rain. Both Espargaro and De Angelis spent FP2 working on the wet set-ups but the section was not really productive as the track started to dry after the first 20 minutes. De Angelis, who constantly improved in the FP1 and finished 19th, expected to improve his lap time in the FP2, but with the rain he had to start to understand the new machine on the wet.

Aleix Espargaro (4th / 1'57.002 /14 laps)
This morning we struggled with the front because the bike doesnt turn as I would like. We made some big changes for the FP2 and the first impression was positive but I couldnt confirm the solutions we were testing as it started to rain. It was a pity because then the track started to dry so we couldnt really use the session to refine the set-up. If we have these conditions on Sunday it will be a very difficult race, because half track was completely dry while another half was wet.

Alex De Angelis (19th / 1'59.959 / 13 laps)
Its great to return to MotoGP and Im happy with the result we got this morning. We started with a standard setup with a lot of traction control just to get the feeling with the bike. Lap by lap we improved and Im satisfied. The plan was to continue to work in the afternoon, but due to the rain I had to try the wet set-up. I struggled more in the FP2 and it was not easy to understand the bike in these changing conditions. Anyway Im confident that I can improve during the weekend.

Bridgestone: Marquez sets the pace in both the wet and dry in mixed first day at Brno

Marquez pushed all the way for pole position in Brno qualifying