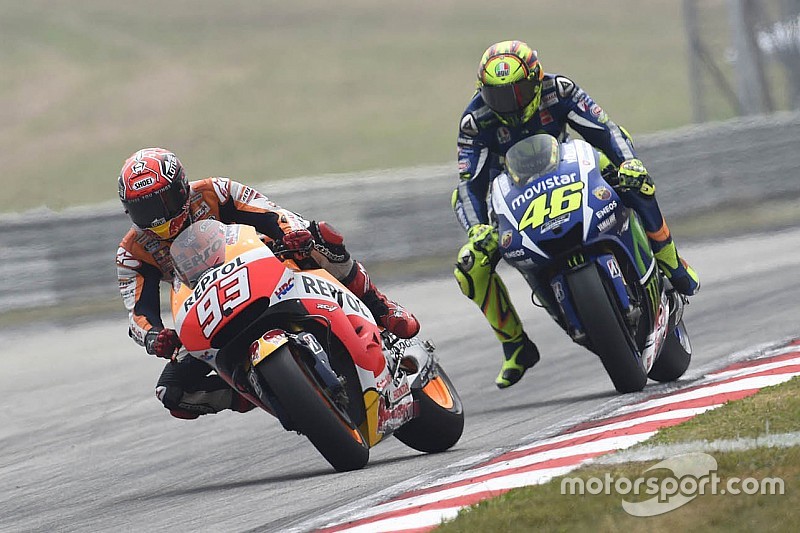 Yamaha has issued a statement refuting claims made by Honda and its title sponsor Repsol that Valentino Rossi kicked Marc Marquez in their clash in the Malaysian Grand Prix.

The duo came to blows at Turn 14 on the seventh lap of the Sepang race as Rossi ran Marquez to the edge of the circuit. As the pair made contact, Marquez crashed, while Rossi continued to finish third.

Race direction chose to demote Rossi to the back of the grid for this weekend's Valencia season finale, but found no evidence that he had kicked Marquez despite video footage showing contact between the Italian's leg and the handlebars of Marquez's Honda.

Following on from a bombastic statement released by Honda's title sponsor Repsol immediately after the race, which accused Rossi of kicking Marquez, the Japanese factory reiterated this stance in a Q&A with HRC vice-president Shuhei Nakamoto issued on Monday.

"The data from Marc’s bike shows that even though he was picking up the bike trying to avoid contact with Valentino, his front brake lever suddenly received an impact that locked the front tyre, which is the reason for his crash," said Nakamoto.

"We believe that this pressure was a result of Rossi’s kick. The data acquisition from Marc’s bike is available if anybody from Dorna, the FIM or media want to check.”

In repsonse, Yamaha has issued statement refuting Honda's claims, arguing it was not proven by race direction in Malaysia that Rossi kicked Marquez's bike.

"Yamaha would like to express its disagreement with the words that have been used to report on the incident between riders Valentino Rossi and Marc Marquez," the statement read.

"Both press releases included words that accuse Valentino Rossi of kicking Marc Marquez‘s bike that is something not proven by the investigation of the Race Direction.

"We therefore reject the wording used in the said published statements that do not correspond with the findings of the Race Direction.

"Yamaha has no wish to enter into further discussion regarding this unfortunate affair and our desire is to conclude the 2015 MotoGP season in the best possible way.

"We go to Valencia with the clear intention of trying our best to win what we hope will be a memorable final race with all riders and teams competing in an exemplary sportsmanlike manner befitting the top category of motorcycle racing."