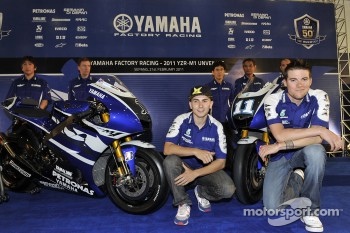 Jorge Lorenzo and Ben Spies with the 2011 Yamaha YZR-M1

The press conference, held at 1800 local time at the Sepang International circuit, included welcome speeches by Lin Jarvis, new team director Massimo Meregalli, and team manager Wilco Zeelenberg. They were joined by Shigeto Kitagawa, Masahiko Nakajima, Kouichi Tsuji and riders Jorge Lorenzo and Ben Spies. Tomorrow's test, running from 22nd to 2 4th February is the second of three pre-season tests, with the third and final at Qatar on the 13th March in advance of the opening round of the 2011 championship the following week.

"I'm very happy to be here again preparing to start another season riding with Yamaha," said Jorge Lorenzo. "Winning the World Championship last season was an incredible feeling, but now we start again. I have a great crew and with the hard work of the Japanese engineers over the winter I feel confident we can fight for more success this year."

"We worked really hard last year to earn the seat with the Yamaha Factory team so it's a great feeling to be here alongside Jorge," commented Ben Spies. "It's obviously a special year for Yamaha with the 50th Anniversary of GP racing celebrations so I'm really stoked to be par t of it. The bike's feeling really good, we've got a few days more of testing now to really shake it down and fine tune the set up and we'll be ready to go. I'm loving the corporate blue colour scheme, I'm a big fan of the design."

"I'm proud to be here for the 2011 Yamaha Factory Racing launch and the start of a new era for the team," said Lin Jarvis, Managing Director, Yamaha Motor Racing Srl. "This is an important year for us being our 50th anniversary of involvement in Grand Prix racing and we start the season not only with the reigning MotoGP World Champion but also welcoming Ben Spies, last year's Rookie of the Year to the Factory Team. It's fitting that we will line up for the start of this special year in our corporate colours."