Zarco asked to "take it easy" by Marquez's mother 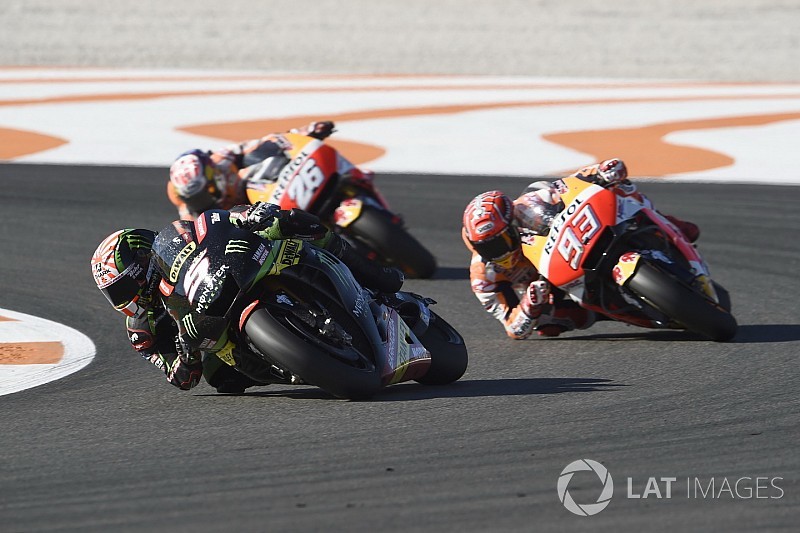 Johann Zarco says he was asked by Marc Marquez's mother ahead of Sunday's Valencia MotoGP title decider to "take it easy" and not risk a collision with the title favourite.

After qualifying first and second respectively, it was suggested Marquez would need to be take extra care while racing with Tech 3 Yamaha rider Zarco, who has established a reputation for being an aggressive overtaker in his rookie MotoGP season.

The newly-crowned champion himself admitted his late mistake that nearly resulted in a crash was caused primarily by the fear of a collision with Zarco.

However, the Frenchman said he "took it easy" during the race, as Marquez's mother had specifically asked him to be careful prior to the race.

"I said, 'yes I will listen, don't worry'. But finally, Marc listened even more to his mum."

After Marquez was ruled out of victory contention, Zarco and Dani Pedrosa were left fighting for the win, with the latter making the decisive move at the start of the final lap.

Despite missing out on a maiden MotoGP win by three tenths, Zarco said being disappointed "would be the wrong way" to reflect on the race.

"I must be happy, to be disappointed to miss the victory would be the wrong way to analyse the race," he said. "I had the elements in my hands to believe in the victory and I took it.

"I believed until the last corner that maybe I can attack but yes, second place, the best thing is to believe you can win until the end, and I think it is really enough for this season."

Race winner Pedrosa, who took fourth place in the standings off Valentino Rossi with his victory, praised Marquez for managing to stay on his bike during his near-crash.

Marquez's left knee and elbow were touching the asphalt after he lost the front of his factory Honda at the first corner, moments after he passed Zarco for the lead.

Miraculously, he managed to regain control and kept running despite having to run through gravel.

That incident did not have a major effect on Marquez's title hopes, as he rejoined in fifth and eventually finished third following crashes for Ducati pair Andrea Dovizioso and Jorge Lorenzo.

"I don't know how many laps maybe six, seven laps to go, he [Marquez] tried to go for the win and he slid," said Pedrosa of Marquez's save.

"It was amazing to see it from behind, you could see the black line, you saw his position and the smoke, the speed, he is like... phew!

"But then at the same time, you see that he is not crashing, so amazing to see the save in person."