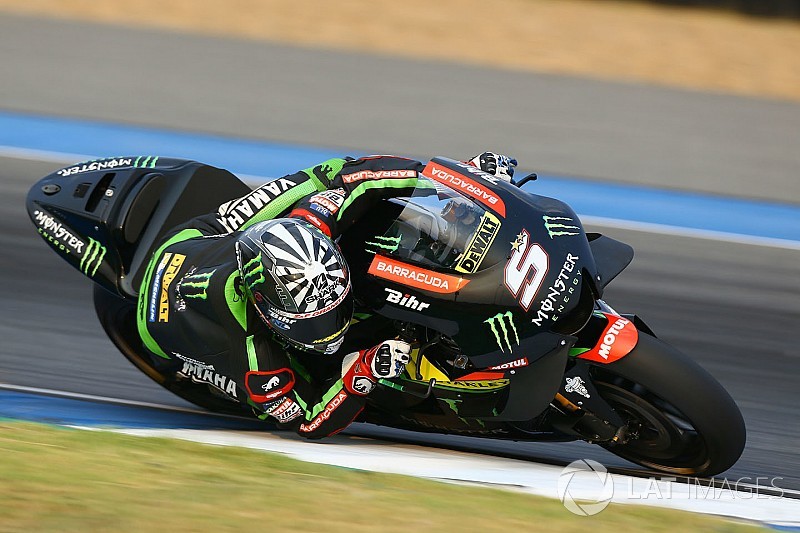 Johann Zarco believes he is "close to 100 percent" of the potential of the 2016 Yamaha MotoGP package following the second pre-season test of the year in Thailand.

While both Rossi and Vinales were left worried by their lack of pace, Zarco was focussed on making further gains on the 2016 Yamaha having chosen to concentrate on the older bike after the opening pre-season test at Sepang.

"[As] I say since last year, there is big potential on this bike and I need to use 100 percent of this bike every time I go on it," said Zarco.

"This third day I think was quite close to 100 percent of the bike and we can see that I'm competitive so [I have to] understand this pace to repeat it in the future."

Asked to assess his long-run pace compared to his rivals, he added: "[I] can be close to the podium or on the podium I would say.

"For the victory, I see Marc [Marquez] much stronger and he can even play more with the bike and be faster every lap than me.

"So if I just speak about victory I say at this test Marc [is the favourite] but myself, [I'm] able to be on the podium."

Zarco reiterated he is seeking to emulate the smooth, high-corner speed style of Jorge Lorenzo in order to extract the maximum from his two-year-old mount.

"I'm still convinced on that because Lorenzo was so fast, even with the Ducati in Malaysia he did the lap record," said the Frenchman. "It means that Ducati is good but it means also the rider is good.

"On the Yamaha he was many times at this level. Maybe at the moment he did not find this here in Thailand, but it's the way to go fast so I am still trying to understand this."

Zarco hopes Syahrin will be teammate

On the other side of the Tech 3 garage, Hafizh Syahrin made his MotoGP test debut in Thailand in place of the unwell Jonas Folger, who he is set to deputise for this season.

Zarco expressed hope the Malaysian rider would soon be confirmed as his teammate for 2018.

"I am really happy for him, I hope we can keep him for the season because he has a lot of humility and he is very clean rider, very smooth," said Zarco of Syahrin.

"Being smooth on the bike, it means he has more margin to go up, to be faster.

"It looks [like] compared to all the guys that the team had at the end of the [2017] season he is the one with the most margin to go up because he is younger with more humility and ready to listen."