Johann Zarco says Jorge Lorenzo's eventual success on a Ducati last year gives him confidence he can make a success of his KTM MotoGP move.

Tech 3 Yamaha convert Zarco had a low-key start to his KTM career in post-season testing, suffering two crashes in Valencia and ending up towards the bottom of the times the following week in Jerez.

However, the French rider insisted he had made progress at Jerez, explaining that he needs to adjust both his way of riding and the way the RC16 behaves to be able to get up to speed.

Elaborating further on his transition, Zarco said the fact that Lorenzo was finally able to score three victories on a Ducati after a difficult start to his tenure with the Italian manufacturer without radically changing his style has convinced him that the main onus is on KTM to help him get comfortable.

"We must remember when Lorenzo went on the Ducati, it took a long time to adapt, and when you saw him win, it looks like he was winning like he was on the Yamaha, not a big difference compared to Yamaha," he said.

"It means working on the bike to give the feeling to the rider is the main key.

"I keep an open mind to adapt myself and be able to have a bigger range of skills on the bike, but we know that insisting on some way, and if the team understands and knows we are on the good way, it will pay [off]."

Zarco added he is convinced he does not need to emulate teammate Pol Espargaro's aggressive style.

"That is why I must find my base, because I will not ride like Pol," he said. "I can find some ideas and sometimes try things like he is doing, but I am not able to copy him and I know that my smooth style is anyway great.

"This is really the Zarco style. When I have the feeling I can be very consistent and every time we improve the laptime and when we will be consistent in the [1m]38s, it will be very interesting."

Next season will mark Zarco's first as a factory rider in MotoGP, having spent two years riding old satellite Yamahas.

He said the sheer volume of material that needs to be tested, and the amount of engineers there are on the ground to support he and Espargaro, required adjustment as well as his riding.

"We have so many things to still try, to understand," said Zarco. "The last few years I had few things [to try], and I knew where the best of [the bike] was, and what was possible. Maybe it made the work simple.

"Here there is much more information to control, we have many more guys in the garage, but also the rider needs to grow up about the feeling, and control all emotions to be able to understand and give good information." 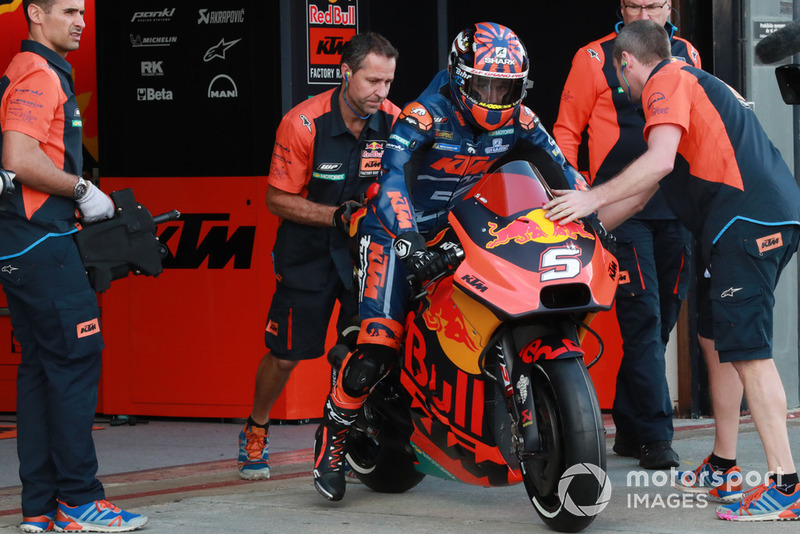