Zarco: Pedrosa feedback a boost after "six months of suffering" 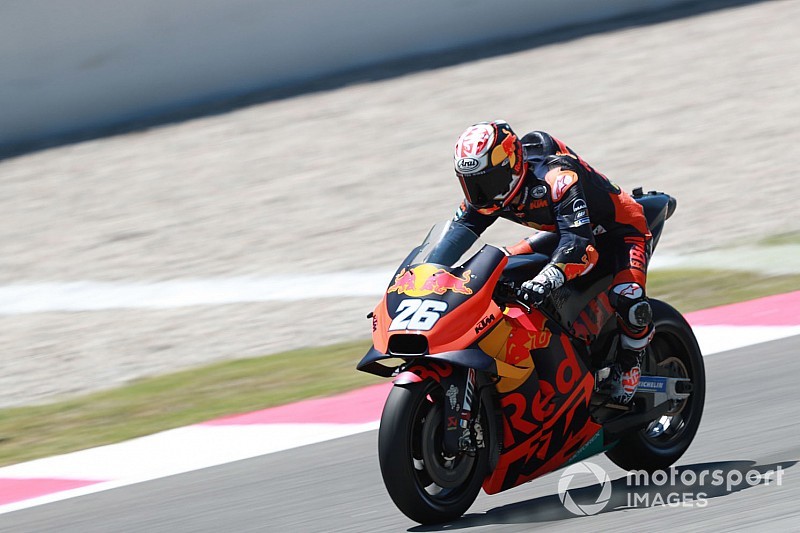 KTM MotoGP rider Johann Zarco says the similarities between his feedback and that of test rider Dani Pedrosa have come as a boost after “six months of suffering”.

The beleaguered Frenchman has found it difficult to get to grips with the KTM bike, being reliably outqualified and outraced by teammate Pol Espargaro since having made the jump from the satellite Tech 3-run Yamaha.

Zarco's public dissatisfaction with the RC16 has led to tensions within the team, which culminated in him being admonished by CEO Stefan Pierer, who said his rider's struggles were of a mental nature.

But with former Honda star Pedrosa having begun testing the RC16 again after a long spell out with injury, Zarco says he has been boosted by the Spaniard's comments – as he believes it will give more stock to his own feedback.

“It helps me that these comments now are taken in consideration much more than before,” Zarco said in the lead-up to the Assen round. “Because the doubt before was, if I say something, then we are thinking that I want to make a Yamaha bike.

“But I just want to make a good bike. And when Dani was telling the same, [it] was great because he never ride the Yamaha, so it means that my comments were in the target to make a better bike but not make a Yamaha bike.

“[I'm smiling] because it's been maybe six months of suffering, now I hope that I will breathe a little bit more.”

Zarco, who recorded the best finish of his KTM tenure so far with 10th place in Barcelona, rode the bike in the official post-race test and a subsequent private test day during the subsequent week.

“Comparing the test I did in Jerez at the beginning of the season, it was the same plan, full race weekend plus Monday and Wednesday, I was quite tired because always fighting with the bike,” Zarco recalled.

“In Barcelona I got a better laptime and was able to keep also good energy till the end of the Wednesday, so these are kind of positive points that [help me] find constancy, and keeping the energy, and I think it's a key to make a good base of the bike, then go up.”

Teammate Espargaro was sidelined for the private test day after crashing on Monday, but said this was mitigated by having Pedrosa available.

“So imagine if I couldn't test on Wednesday and just Johann tested on Wednesday. We trust a lot in Johann, but the amount of info is half,” Espargaro said.

“So having Dani there, especially for the project – maybe not for now, for the moment – but for the project what Dani was testing was very important, and for future of the company.