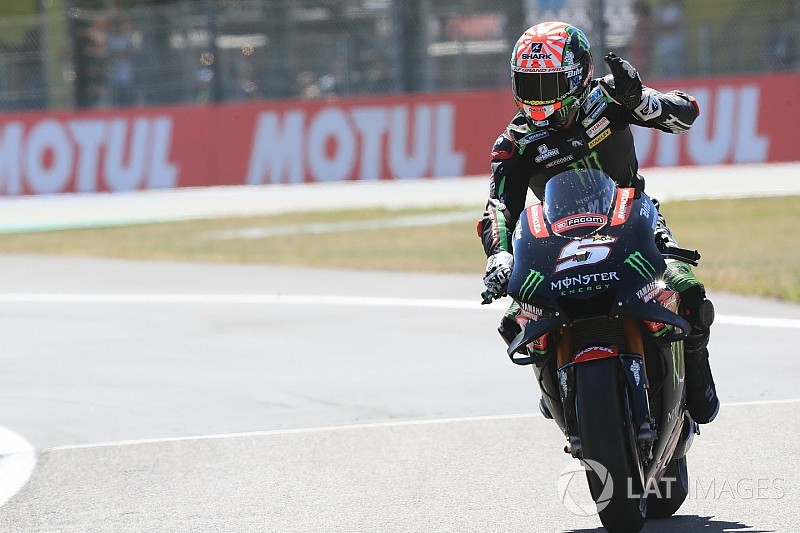 Johann Zarco says he is still "dreaming" of finishing second in this year's MotoGP standings after rediscovering some of his early-season form in the Dutch TT at Assen.

After a pair of subdued races at Mugello and Barcelona - where Zarco admitted he was affected by the "stress" of crashing out of his home race at Le Mans - the Tech 3 Yamaha rider was able to hang on to the tail of the leading group for much of the distance at Assen.

Although he only finished eighth, it means the Frenchman maintains his fourth place in the championship, trailing only race winner Marc Marquez and the factory Yamaha pair of Maverick Vinales and Valentino Rossi, who finished second and fifth respectively in Holland.

Zarco said that the fact Rossi is only 18 points clear in the fight for second means he can continue to target the runner-up spot in the standings.

“Happy to fight from the first lap, overtake riders, keep the contact with the top guys,” said Zarco. “Very positive feeling that I was missing in the last two races. Happy to be back in this fighting mindset.

“The last seven laps I was sliding a bit too much, because maybe we did not do the right things during all the weekend. It was a disadvantage during the race. It’s a lesson, experience.

“Now [I’m] dreaming of the second place in the championship, because this is possible. Valentino is not that far [ahead], only Marc is going away.”

Asked whether he would rather finish second in the championship or take a maiden premier class race win that has so far eluded him, Zarco replied: “Both!

“[I’m] always dreaming about victory, but also about a nice place in the championship.

“Now when you are fourth, and you can have [a chance to get into the top three]… at the end of the year I will realise that top three is just awesome in MotoGP.”

Marquez must "attack", not "relax" with 41-point lead