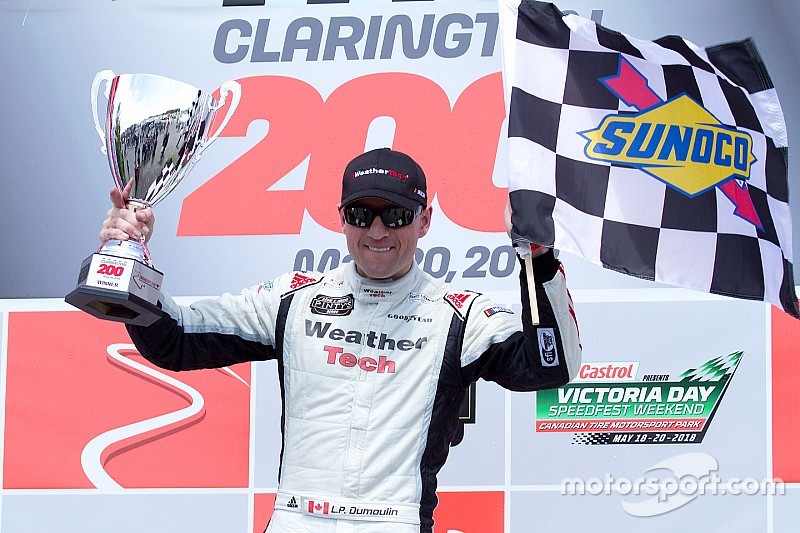 The NASCAR Pinty’s Series returns to Jukasa Motor Speedway for second race of the season this Saturday.

The Québec driver from Trois-Rivières will try and score his first back-to-back wins in his career this weekend at Jukasa Motor Speedway in the Rankin Construction 200.

Dumoulin already has a win on an oval scoring a victory at Wyant Group Raceway during his championship season in 2014 and will go for another one this weekend.

Dumoulin finished third in the Pinty’s Series season finale last season in the first NASCAR race at the track since 2008.

“I loved racing at Jukasa (Motor Speedway) last season,” said Dumoulin. “The race track is really nice and super smooth and we had a great time there and a good race in the season finale.

“It’s also the home track so to speak for my sponsor Weather Tech so we’ll have a lot of people there on Saturday cheering us on and we want to give them another win to celebrate with us in Victory Lane.”

Dumoulin just hopes he doesn’t have another long dry spell between wins.

“I don’t want to go that long again between wins for sure,” added Dumoulin. “My guys have worked really hard over the winter to step up our program and we feel confident we’ll have a good car for the race.”

Dumoulin added that his team has worked hard over the past two seasons bringing most of his operations in house and their dedication is paying dividends on the track.

The advice of an old friend

The team, that also features L.P.’s older brother J.F., tested last week at Jukasa Motor Speedway and brought in a old friend with a lot of oval track experience to offer any advice.

“My friend Mario Gosselin came over to our test last week to offer some advice,” said Dumoulin. “He’s raced a lot himself on ovals and has a lot of experience so we asked him to come over and hang out with us during the test and we appreciated that a lot.”

Gosselin won the 2017 Pinty’s Series championship with Alex Labbe last season and is leading the effort as Labbe is competing in the NASCAR Xfinity Series this season in the United States.

“My team has done a great job giving me a great car at CTMP for the road course and I’ve actually done better on ovals over the past few years and my team has a really good car ready for me this weekend,” said Dumoulin. “We’re going after the championship this season and to win a championship you have to win races and that’s what we’re going after this weekend at Jukasa. To get back-to-back wins would be great for our team.”

While Dumoulin has the momentum entering the race weekend, he’ll also have some formidable competition to face in the strong field of cars.

Donald Theetge and Kevin Lacroix also finished in the top five in last year’s season finale with Theetge about 200 yards short of the win before he was bumped up the track by eventual race winner Cayden Lapcevich.

Jukasa Motor Speedway promoter Alex Nagy said he expects the same action-packed racing this weekend when the Pinty’s Series returns for the first of two scheduled visits to the track this season.

“It’s impossible to point to just one driver to keep an eye on this Saturday,” notes Nagy. “I know that our fans are in for a treat as soon as the field hits the grid this weekend. This is the perfect time to be a Pinty’s Series fan because there’s so much excitement around the roster and what the season has in store. The drivers had a fantastic race at [Canadian Tire Motorsport Park] in May and I’m positive they’ll be bringing that same energy to Jukasa for Round 2.”