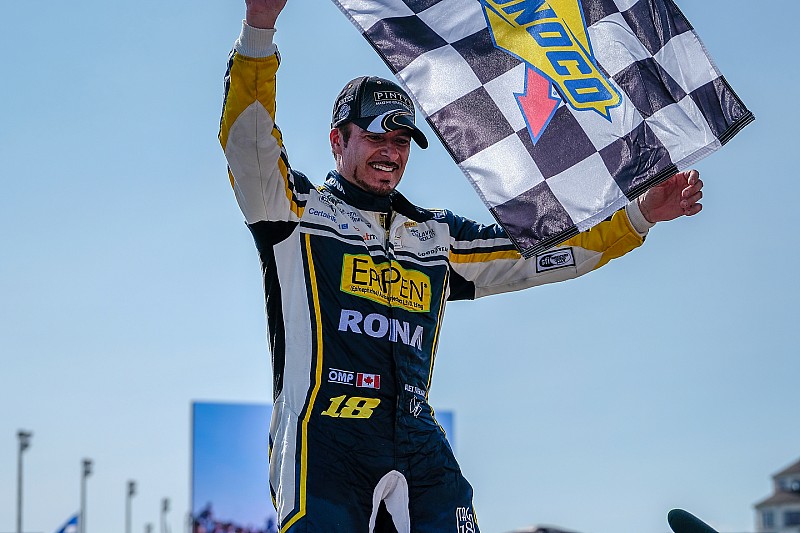 Despite body damage to his car and two late restarts, Alex Tagliani was able to hold off Andrew Ranger to win the Pinty’s Grand Prix of Toronto for the second time.

If Tagliani is able to win his first NASCAR Pinty’s Series championship this year, he’ll probably look back at this race in Toronto as one of the key moments of his season.

Tagliani started from the pole and was able to remain out front in the lead pack throughout the entire race. He fell to second when Marc-Antoine Camirand was able to take the lead after Tagliani and Andrew Ranger made contact heading into Turn 1 on Lap 32.

Disaster struct soon after for Camirand as he hit a tire barrier while leading handing the lead back to Tagliani.

Tagliani was able to stay out front on the final restart and go on to pick up his first Pinty’s Series win of the season and ninth of his career.

“I am super happy to have brought this win to Team 22 Racing,” said Tagliani. “The team gave me a really good car this weekend and we scored maximum points. I am really proud of the guys especially after a season debut that did not go as well as I had expected on oval tracks.”

L.P Dumoulin was third with Kevin Lacroix, the only driver besides Tagliani or Ranger to win on the street course, fourth and J.F. Dumoulin rounding out the top five.

The late restarts were key for the veteran Tagliani who described the toughness - both mentally and physically - of the street course in Toronto.

“There were some good fights during the race,” he said. “Restarts were tough because of the nature of the track that makes the corners feel like you are entering a funnel. This is very inviting for those who want to pass you.

“The leader sets the tone with his breaking, but if you don’t block enough, you invite the driver in third place to jump ahead of you, like Andrew (Ranger) did on Lap 15. If you block too much the car behind you in third place, you open the door to the driver on the outside.”

After losing a battle to Ranger in last year’s race in Toronto, Tagliani was happy that he was the one who came out on top this season.

“The battles I had with Andrew, who was driving very aggressively but cleanly, are what makes car racing exciting,” said Tagliani. “Today’s feuds were similar to those we had last year, a battle that I lost, but not this year. This victory reduces the gap to the leader in the point standings. Overall, a very satisfying weekend.”

Ranger overtook the lead in the championship standings over Lacroix by two points (174-172) with his runner-up finish.

“On that last restart I was second behind Alex and I tried to make a move on the inside that didn’t work out,” he said. “I pushed hard but I also didn’t want to wreck there at the end and lose a good finish.

“We qualified sixth and that’s not where I wanted to start, but we came up and led laps and came away with the points lead.”

The series will next head west for its annual three-race swing in 11 days with Wyant Group Raceway hosting a doubleheader on July 24 in Saskatoon, Saskatchewan and a 300-lap event three days later at Edmonton International Raceway in Wetaskiwin, Alberta.