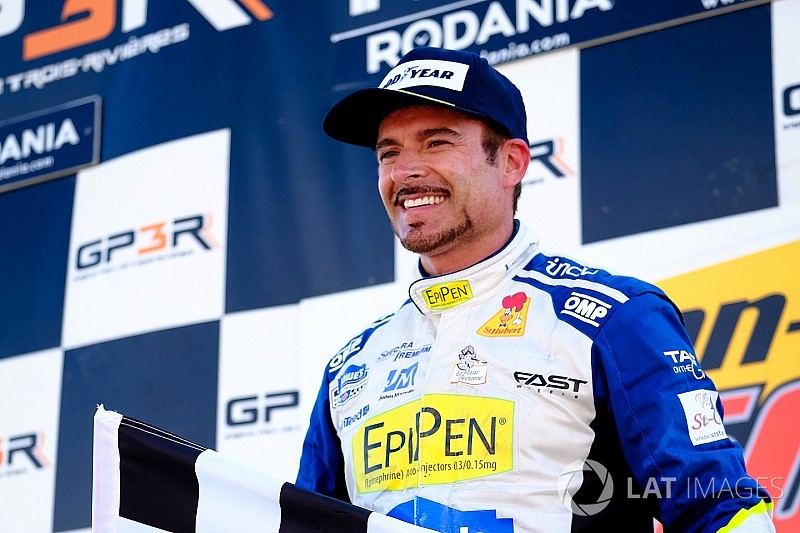 Alex Tagliani scored his first NASCAR Pinty’s Series win in the race held on the streets of Trois-Rivières, the feature event of the GP3R.

Pole position holder Andrew Ranger (No. 27 Dodge) led the field during the formation lap, having set the quickest time in the sole qualifying session with a time of 1:06.958. Alex Tagliani qualified second, just 0.043 second behind Ranger. Marc-Antoine Camirand set the third fastest time ahead of Kevin Lacroix, local competitor L.-P. Dumoulin and Alex Labbe (No. 32 Ford).

The weather was perfect when the 20-car field got the green for the start of the race, titled 'Les 50 Tours Can-Am'.

It was a clean start with Ranger leading Camirand, Tagliani and Lacroix. Reigning series’ champion, young Cayden Lapcevich - not a road course expert - was down the field in 13th place. The top nine cars were separated by just five seconds.

After five laps of racing, Tagliani started to put pressure on Camirand. At the same time, Anthony Simone passed Jean-François Dumoulin for seventh place. On Lap 6, ‘Tag’ managed to pass Camirand under braking to take second position. On Lap 8, Alex Labbe moved ahead of Louis-Philippe Dumoulin under braking for fifth place.

On Lap 10, the order was Ranger, Tagliani, Camirand, Lacroix, Labbe, L.P. Dumoulin, Simone, J.-F. Dumoulin, the surprising David Michaud in his No. 56 Dodge and D.J. Kennington.

If Ranger was alone out in front, Tagliani and Camirand ran in unison. A few laps later, Labbe started to challenge Lacroix for fourth place. On Lap 15, Michaud crashed in Turn 3, after making contact with the barrier, and requiring a full course yellow.

The race was restarted on Lap 19. The positions remained unchanged except for L.P. Dumoulin who regained seventh place from Simone. Laps later, Lacroix’s rearview mirrors got filled by Labbe’s car.

On Lap 24, Lacroix hit the outside tire wall after the Porte Duplessis after having been pushed by a rival. The incident dropped him down the field in 16th place.

At the mid-race point, Tagliani caught Ranger out in front with Camirand a very close third. At the end of Lap 27, Tagliani passed Ranger under braking for the Ryan hairpin. One lap later, several cars were in trouble out on the race track, bringing out the Safety Car.

The race resumed on Lap 33. Simone got turned around in Turn 6 after touching another car, and Lapcevich barely missed him. The race went under another full course yellow.

Green on Lap 38. Kevin Lacroix, who pitted under the yellow, has climbed all the way up to ninth spot. The top four cars were only separated by just two seconds with Tagliani still the lead. With less than 10 laps to go, Lacroix’s car started to slow down. He pitted with serious transmission woes. In the closing laps, Tagliani managed to pull away from Ranger.

With just one lap to go, the officials called a full course yellow for a stalled car on the race track. The thousands of spectators got ready for a two-lap mad dash to the finish… It was a highly exciting duel between Tagliani and Ranger until the finish.

Tagliani crossed the line just a few feet ahead of Ranger. It was Tagliani’s sixth career win in the Pinty’s series and his third on a road course. Marc-Antoine Camirand secured third place ahead of L.-P. Dumoulin, Alex Labbe, J.F. Dumoulin, Lapcevich and D.J. Kennington.