Cayden Lapcevich ready to represent Canada in NASCAR Next 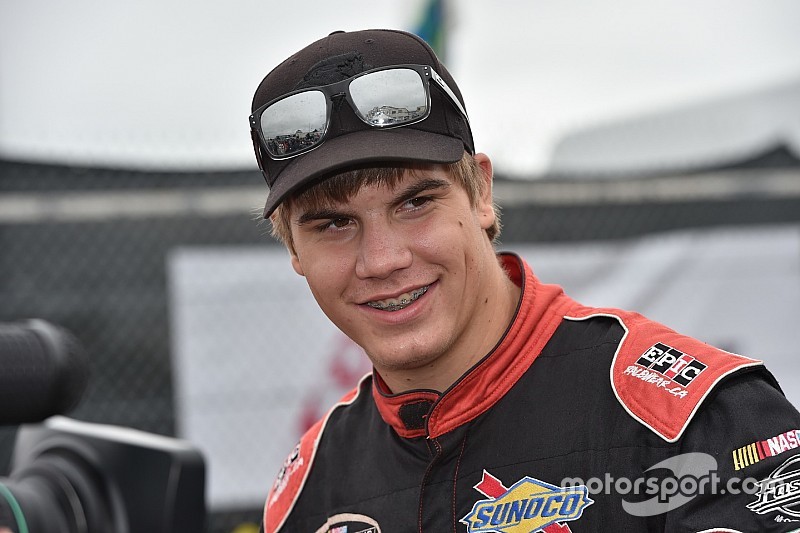 The latest edition of the NASCAR Next class for the 2017 season was introduced this week and Cayden Lapcevich had a reason to celebrate.

The defending champion of the NASCAR Pinty’s Series became the third driver from Canada to be selected as a member of the prestigious program highlighting young drivers who have the potential to succeed at one of NASCAR’s national series levels. The other two Canadians who’ve participated in the class are Gary Klutt (2016) and Cameron Hayley (2012-2013).

Lapcevich, from Grimsby, Ontario, surprised the field last season scoring three wins en route to his first NASCAR championship in his home country. He also became the first driver in Pinty’s Series history to earn both Rookie of the Year and the series title honors in the same year.

The 17-year-old driver took some time out during an event to feature the NASCAR Next class earlier this week to talk with Motorsport.com.

How does it feel to be a member of NASCAR Next and what do you hope you can get out of it?

It was very cool to get that phone call. I think it’s going to open up some big doors in the future. It’s come at a good time in my career and should help sell myself to sponsors and maybe open up some eyes down here in the NASCAR world. I’m really excited to be a part of this program, I think I can learn great things and I can’t wait to see where we go with it.

After last year’s incredible season, how do you approach this year?

I don’t know if you can really go out and expect to top it, but there are some goals that I didn’t reach last year, that I’d like to this year. I know if we go in prepared every week like we did last year and compete to the best of our abilities and see what we can get out of it. I’m really excited to see what this season brings – I’m really prepared for it, even more than last year because we are expecting to run the whole season.

The season kicks off at Canadian Tire Motorsport Park this weekend, what do you like about track and what will it take to get your first road course win?

The NASCAR Pinty’s Series is filled with road course ringers, I like to call them, and they are really hard to beat but I think I have the ability to do it, it’s just a matter of putting all the pieces together.

What’s it like to have your dad as crew chief, a successful racer in his own time?

Family is everything to me, having my family at my side at the race shop, at the track – it means a ton to me. I know a lot of people these days in the racing world don’t get to spend as much time with their families as they want to. I love being able to spend every weekend with my family at the race track, working with my dad, which I feel is so much easier than working with somebody I might not know that well. I just have a really great connection with my dad. It makes it a little bit easier as we get along really well, he knows what kind of car I like and what kind of car I don’t like.

When did you decide that NASCAR was the path you wanted to take?

It’s always been my goal to get to the top step of NASCAR. So, when NASCAR moved into Canada that was an opening that made it a little bit easier. I think NASCAR Next is really going to help up open up some more doors. NASCAR has sort of always been the path I wanted to take.

Where did your interest in NASCAR come from?

I’ve always sort of like it. My dad grew up racing stock cars and running Grand Am and stuff. We’d always watch the races together on weekends when he wasn’t racing and I’d play with the little toy cars. I’ve always had a passion for it. I’ve always been a really huge Dale Jr. fan.

Meet the 2017 NASCAR Next Class Here.