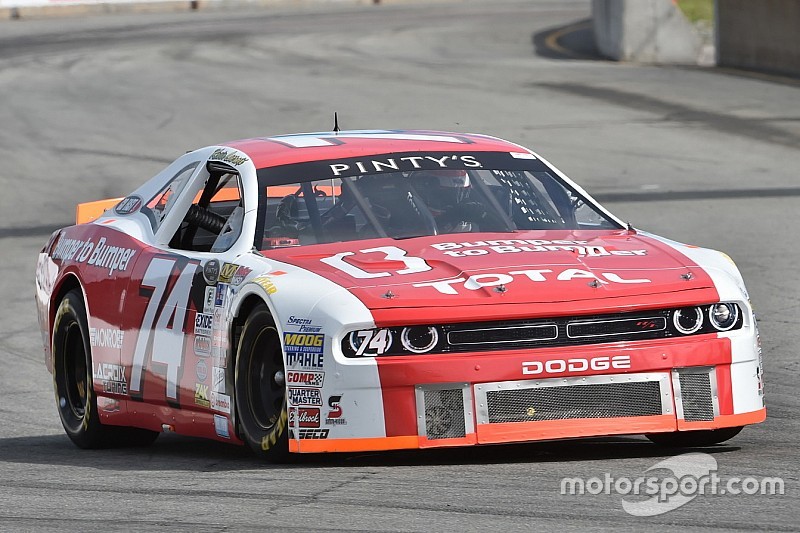 A former open wheel racer, Lacroix set the fastest time during the morning practice session with a time of 1:22.364. Alex Tagliani was second ahead of Anthony Simone, D.J. Kennington, LP Dumoulin, Andrew Ranger and Gary Klutt.

Lacroix backed up his fast run in practice during qualifying later in the afternoon.

The field of 24 cars was split into three groups for the qualifying session held Saturday late afternoon.

Under a slightly cloudy sky, Joey McColm set the quickest time in Group A ahead of Noel Dowler, Trevor Monaghan, Jocelyn Fecteau and Bradon White.

The car of Cayden Lapcevich suffered a mechanical problem and his crew worked very hard to get him out in time for his qualifying effort. Marc-Antoine Camirand set the fastest time early in Group B. Alex Labbe, whose car had a new engine, headed for pit road and exited his car. Apparently, the transmission broke on the No. 32 machine and Labbe did not set a lap time during the session. Meanwhile, Lapcevich moved into fourth place.

After Group B’s run, the order was Camirand, Scannell, JF Dumoulin and Lapcevich.

Tagliani set the fastest time before Lacroix put the hammer down with a 107.265 mph lap. Anthony Simone was then in second with a 107.127 mph lap. Tagliani would finish third overall.

Lacroix, driver of the No. 74 Bumper To Bumper/Total/Go Fast Dodge who has won the last two series races at CTMP, will start on the point for tomorrow’s Total Quartz 200 after scoring his second consecutive pole at the track and his fifth of the season.

Anthony Simone, a former top Formula 1600 competitor,  will start alongside Lacroix on the front row in his No. 95 Innovative Plumbing/Ink Your Ride car.

“We expected good things for qualifying because we were quick during practice,” said Lacroix who won the opening round of the season here at CTMP in May last. “We didn't change the set-up and the car became loose in qualifying. I put a good lap in, with no mistakes. I'm happy to see Anthony [Simone] alongside me for the race because I know that nothing silly will happen with him.”

Points leader Alex Labbe was forced to change engines during practice and continued to have problems in qualifying. While making his attempt he headed for pit road and exited his car. Apparently, the transmission broke on the No. 32 machine and Labbe did not set a lap time during the session.

The Total Quartz 200 At Canadian Tire Motorsport Park will go green at 11:05 am on Sunday morning.