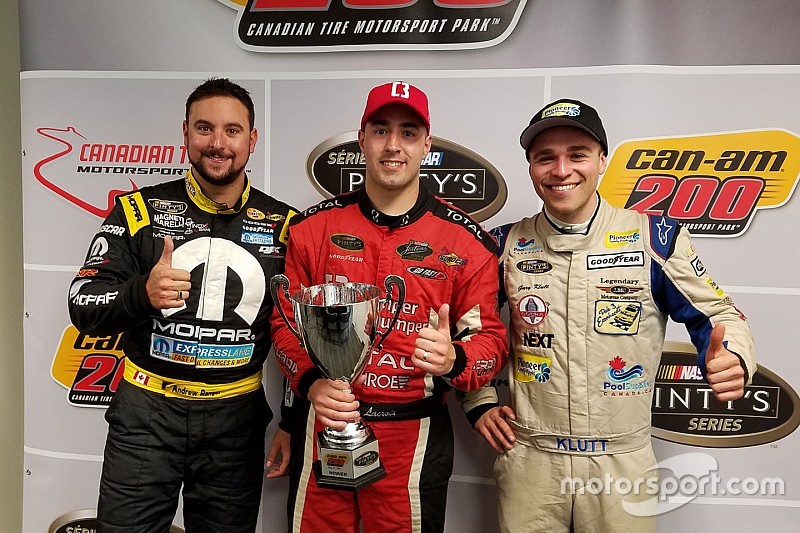 Kevin Lacroix showed everyone on Sunday afternoon he had the fastest car in any type of conditions at Canadian Tire Motorsports Park.

Lacroix led on the Lap 51 overtime restart and was passed by Andrew Ranger on the Lap 51 in Turn 8 but rebounded to take the lead on the white flag lap and hold on for his second consecutive win at CTMP and fifth overall in NASCAR Pinty's Series competition.

Gary Klutt was able to pass defending series champion Cayden Lapcevich coming out of Turn 10 to finish third with the NASCAR Next driver Lapcevich fourth and Alex Labbe fifth.

"That was probably the most fun race I've even driven," said Lacroix. "It's the first time I've raced in the rain in these cars and I knew it would be difficult but so happy to win the first race of the season for the team."

Lacroix said he made a mistake on the next-to-last lap that enabled Ranger to get the lead temporarily.

"At one point I couldn't see anything," Lacroix said. "I could hardly see and made a mistake on that lap and I was able to recover and get another run past Andrew and get the lead back. We have a fast car for qualifying and the race and it feels great to get off to a good start to the season."

Lacroix started from the pole and was fast all race but really started showing the speed of his car late in the race.

After Jason White hit the tire barrier in Turn 3 L.P. Dumoulin led the race with Lacroix in seventh place on the restart. Lacroix diced through traffic and was back in the lead by Lap 44.

Alex Tagliani, who ran in the lead pack almost the entire race lost control of his car and hit the tire barrier in Turn 2 to bring out the final cuation of the race and set up the overtime finish.