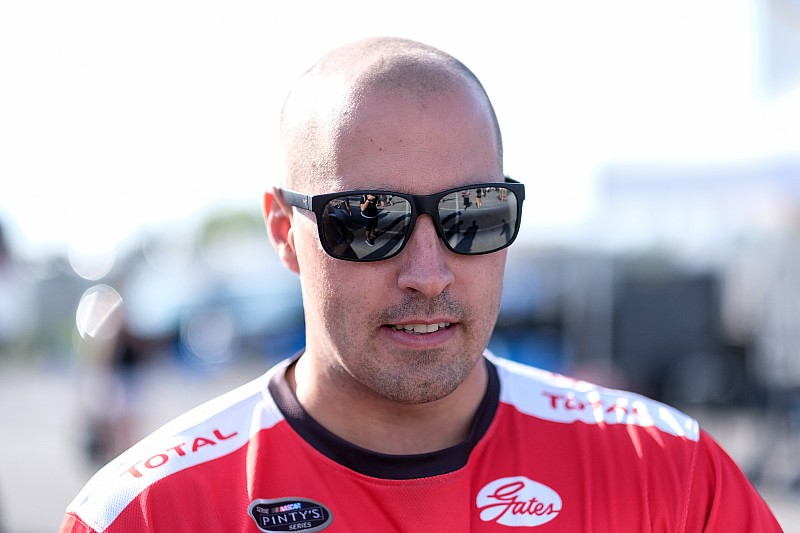 Veteran driver picks up fourth win at Canadian Tire Motorsports Park after daring pass by Andrew Ranger on Lap 50 to take the lead for the final time.

What a difference a year makes for Kevin Lacroix.

Last year he was leading the race on the final lap when he and Andrew Ranger got together giving L.P. Dumoulin the win. This year Kevin Lacroix returned the favor on Ranger except no contact was made.

Lacroix was able to dive inside of Ranger in Turn 10 coming to the white flag and held on to score his fourth Pinty's Series win at Canadian Tire Motorsport Park in the Clarington 200.

It’s the fourth win in the past six races at the legendary road course located outside of Toronto in Bowmanville, Ontario.

“It was the same thing as last year and it was a little bit stressful in corner 5 with Andrew (Ranger) but this time we kept it clean and got the win at the end,” said Lacroix in Victory Lane after picking up his 11th series win.

“It was different than last year as we waited a little bit longer to pit for tires and it paid (off) at the end of the race to have better tires and it made the car better and faster. (I’m) happy to get the win for Total and Bumper to Bumper.”

Ranger finished second with Gary Klutt, who started from the pole, finishing out the podium with a third-place showing.

After providing the drama on the final lap last year, Ranger said he didn’t want that to happen again this year.

“We tried to do a different tire strategy different than everyone else and it wasn’t the best idea,” said Ranger. We finished second and I didn’t want to repeat what happened last year (with Lacroix).

“Normally when I finish second I’m not that happy but I’m happy today. The car was fast and very comfortable and the guys did a great job over the winter.”

J.F. Dumoulin was sixth with Alex Labbe also having a good run in his full-time return to the series coming home seventh with DJ Kennington, Peter Klutt and Jason White rounding out the top 10.

It didn’t take long for action to pick up on the track when Alex Tagliani, Lacroix and Marc-Antoine Camirand all getting together on Lap 3 while racing in the top five.

Lacroix was able to clear the incident without any major damage while Camirand suffered body damage and Tagliani suffered a flat right rear tire that eventually came apart and gave his career significant body damage.

Ranger and Kennington both decided to pit for tires under caution on Lap 22 and it seemed at the end of the race Lacroix having fresher tires made a big difference when making his pass in Turn 10 late in the race.

Lacroix won the race by .555 seconds over Ranger with 20 of the 23 cars finishing on the lead lap in the competitive season opener.