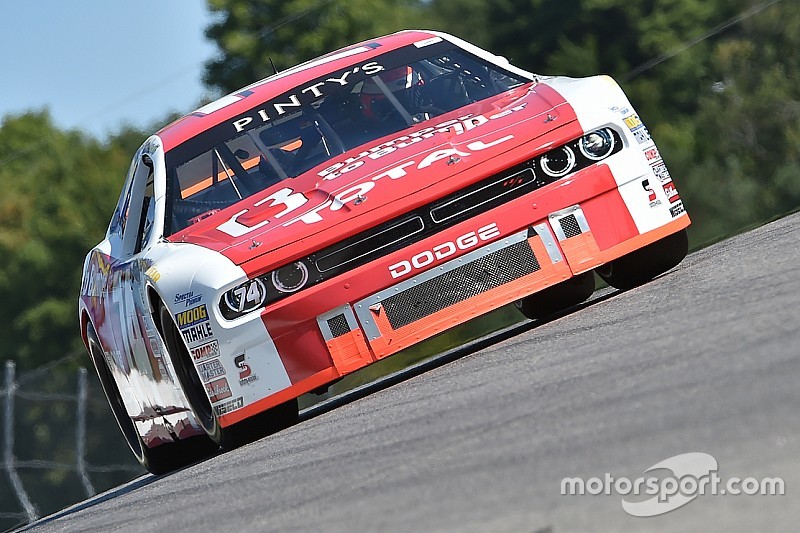 Kevin Lacroix scored victory in Round 11 of the 2017 NASCAR Pinty’s Series at Canadian Tire Motorsport Park as part of the NASCAR Truck meeting.

St-Eustache, Québec’s Kevin Lacroix took the start of the Total Quartz 200 on pole position in his No. 74 with Anthony Simone starting along in the front row.

The big news concerned point standings’ leader Alex Labbe who was forced to take the start of the race on the last row. The transmission broke on the No. 32 machine during the qualifying session and Labbe did not set a lap time, forcing him to start to the queue of the field.

The tarmac was still wet from the heavy morning showers when the cars lined up for the start, calling for all teams to install rain treaded Goodyear tires.

At the end of Lap 2, Labbe was already running in ninth place. Lacroix was out in front with a 2.8-second cushion over two-time series, champion Andrew Ranger. A huge battle developed for third place involving Tagliani, Simone and L.-P. Dumoulin with Marc-Antoine Camirand, another road course expert, really close behind.

On Lap 4, Labbe was up in seventh position. Moments later, Dumoulin passed Simone for fourth. The two drivers then engaged in a fantastic door-to-door battle.

On Lap 6, Tagliani and Ranger engaged in a great battle for second place. Behind them, L.-P. Dumoulin, Simone and Camirand fought hard but fairly over fourth place with Labbe quickly gaining on them. At the conclusion of Lap 8, Camirand passed Simone for fifth place. Further down the field, Adam Andretti has caught Jeff Lapcevich and J.-F. Dumoulin, passes both of them.

On lap 10, Camirand pitted for fuel. One lap later, Tagliani pitted. Lacroix was out in first place, ten seconds ahead of Ranger. Lap 12: Labbe pitted. One lap later, Lacroix and Ranger pitted while the huge battle between L.-P. Dumoulin and Simone continued.

After the pit stops, Tagliani and Ranger resumed their titanic battle for second place. After 15 laps, the order was Lacroix, Tagliani, Ranger, Simone, Camirand. Labbe and L.-P. Dumoulin. The sun was now peaking out of the clouds and the racing line was almost dry, although still quite slippery. Cayden Lapcevich and D.J. Kennington started to battle over 10th place.

On Lap 18, Lacroix’s lead culminated at 12.1 seconds. Tagliani and Ranger were now separated by five seconds. Strategy came into play as to know who would be the first to switch to slick tires…

Lap 21: Labbe pitted for slicks! Two laps later, Ranger pitted for slicks. Others followed right after. Lap 25: race leader Lacroix, and Alex Tagliani also pitted for slicks. Camirand was assessed a drive-through penalty for speeding on pit lane. Not having pitted yet, Simone led the race at the mid-race point. Lacroix was second in front of Ranger.

On Lap 27, Gary Klutt had a scary moment when he lost control of his car and brushed the concrete wall at high speed. He luckily kept it together and was able to rejoin the fray.

His car still on rain tires, Simone couldn’t do much against Lacroix’s progress, with the latter lapping the track two seconds quicker than his rival. Meanwhile, the battle for fourth place involving Ranger and Tagliani was as intense as ever before. And on Lap 34, ‘Tag’ and Ranger traded places. On Lap 35, Lacroix was right on the back bumper of Simone. Lacroix powered ahead of Simone at the end of the Andretti straightaway to take the lead.

The order was Lacroix, Simone (still on rain tires), Tagliani, Ranger, Labbe and L.-P. Dumoulin. On Lap 42, Lacroix had a 15.9 second gap to Simone. Further down the field, Adam Andretti battled Gary Klutt for eighth.

With five laps to go, Lacroix enjoyed a more-than-comfortable 31-second lead over Tagliani.

After 51 laps of hard racing, Lacroix crossed the line in first place to tie Andrew Ranger as the only driver to win three consecutive races at one track. It was also the first last caution free Pinty’s race since ICAR in 2015.

Here are the unofficial results: